Wow. The turncoat Republican elector[1] in Texas, who has joined with the leftist Hamilton Electors, is evidently a liar and a fraud. Go figure. Chris Suprun claimed he was a first responder on 9/11 at the Pentagon as a firefighter. There’s just one tiny problem with that… it’s not true. He wasn’t even hired by the Manassas Park [Virginia] Fire Department until October of 2001. And according to the fire chief there, they never responded to 9/11 anyway. It wasn’t in their service area. And this is a guy who expects us to believe he is standing on principle to reject the will of the voters in his state to elect Donald Trump as the 45th President of the United States, when he has lied for years about this. On at least two occasions over the last couple of years at crowded Major League Baseball games, Suprun has been introduced as a 9/11 veteran before throwing out first pitches. That makes my blood boil for all those who really did respond and for those who lost their lives that terrible day.

It also appears that his resume on LinkedIn is pretty much a work of fiction. “It’s no different than stolen valor for the military; dressing up and saying ‘Hey, I earned a Purple Heart, when you weren’t even in combat.’ There’s a big difference between shopping at Old Navy and being a Navy SEAL,” said the first responder who knows Suprun and who released this info., but didn’t want to be identified. Meanwhile, Suprun has become a hero of the left and is being interviewed by the New York Times and others because of his stance on Trump. 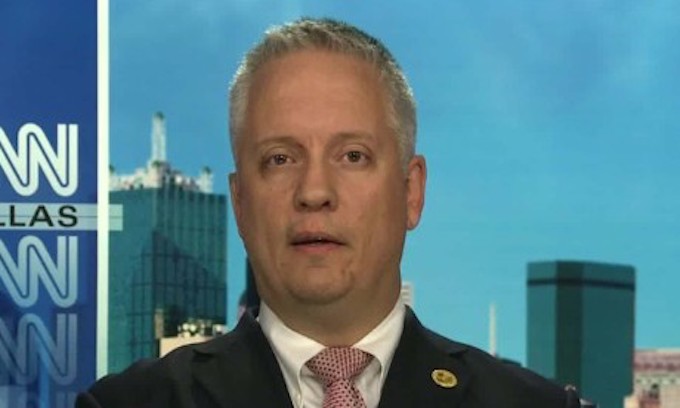 DALLAS – The Republican elector who has gotten national attention for refusing to vote for Donald Trump at the Electoral College on Dec. 19 was apparently not a first responder on September 11, 2001 as he has stated for years and has a questionable career history, according to an investigation by WFAA.

Chris Suprun, 42, portrays himself as a heroic firefighter who was among the first on the scene after the third plane flew into the Pentagon on 9/11.

In a heavily-publicized editorial this month for the New York Times[3], Suprun stated that as a member of the Electoral College he will not cast his ballot for Trump because the president-elect “shows daily he is not qualified for the office.”

Suprun, a Dallas resident for more than a decade, even used his résumé to establish credibility in the Times piece, writing in the second paragraph: “Fifteen years ago, as a firefighter, I was part of the response to the Sept. 11 attacks against our nation.”

He has founded a nonprofit called Never Forget and state records show he is a licensed paramedic — but much of the rest of résumé, publicly available on LinkedIn, is questionable.

Suprun’s current resume shows he is a paramedic with Air Methods air ambulance service. But Christina Brodsly, a spokeswoman for that company, said he is not an employee there. Gee… does this guy EVER tell the truth? Suprun also claims he is currently working as a paramedic with Freedom EMS in Dallas. But records from the Texas Department of State Health Services indicate there’s no such company. A firm with that name used to exist in Houston, but it went out of business in 2008, according to DSHS. I detect a trend here.

In reality, Suprun has spent the last five years in bankruptcy while claiming he was working. Sounds to me like the left found an elector they could buy. He’ll only speak to leftist media, not ones like WFAA who ask hard, honest questions. See the red flags here? He has hired two public relations firms – Megaphone Strategies and Fenton Communications – and they responded to requests for an interview saying: “Suprun’s schedule is jammed packed.” Yes, Megaphone Strategies was founded by Van Jones and both are firms that service only Progressives and causes such as Black Lives Matter.

Here’s a suggestion… the Republican Party might vet their electors a little better and be a bit more choosy who they select. This guy is obviously a stone cold liar and was easily ‘swayed’ to vote against Trump. He’s going against the wishes of the voters of Texas and his party. Why not? It’s the one thing he really should have on his resume and something he excels at… betrayal for hire. Wonder what the going rate for a traitor is these days? Someone should ask Suprun.