Not Giuliani: Trump Considering ANOTHER Replacement for Jeff Sessions

Originally[1], I had heard that Trump wanted to replace Jeff Sessions with Rudy Giuliani. First, let me state that I think this is a HUGE mistake on Trump’s part and I don’t like what he is doing here. Both Rudy Giuliani and Newt Gingrich have come out in defense of Jeff Sessions. He recused himself on the Russia thing to remove any hint of impropriety because he was under investigation. You can’t blame him for that… it’s legalistic ethics at play. Second, Trump is now blaming Sessions for Hillary not being gone after for her criminal ways. That wasn’t Jeff Sessions… that was President Trump who made that decision. None of this looks good at all.

Now, there’s a rumor[2] that Trump wants Ted Cruz to replace Jeff Sessions. Let me put that rumor to bed once and for all. Cruz is not interested and does not approve of this move as far as I know. Trump would never pick Cruz for this because he wants a yes-man in there. Rex Tillerson is also upset over this and other things and is considering leaving as well. I think Trump is frustrated that he is being attacked and can’t get anything done, but he’s attacking the wrong people. 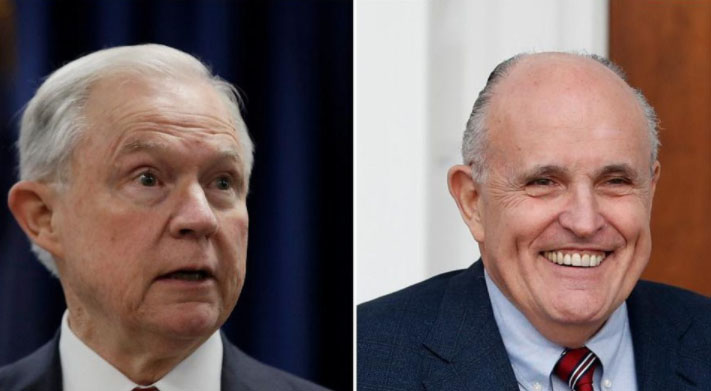 Cruz and former New York City Mayor Rudy Giuliani (R) are reportedly among the candidates Trump’s team is considering to replace Sessions, though Giuliani said earlier in the day that he’s not being considered.

Trump has repeatedly said that he is disappointed by Sessions’s decision to recuse himself from the probe into ties between the Trump administration and Russia, saying in an interview last week that he would have never hired Sessions if he knew he would recuse himself.

Giuliani denied[6] reports that he was up for Sessions’s spot earlier Monday and defended the attorney general’s decision to pull himself from the probe, saying it was “the right decision.”

The media is actually placing bets on whether Sessions will last out the week now. This is just awful. Now, the Republicans are pushing yet another version of their healthcare crap that no one has read and demanding everyone vote on it. I would hope that Paul, Cruz, Lee and others will nix it. Yes, they’ll be blamed, but they are going to be blamed either way here and someone needs to stand on principle or it’s over. Trump may also fire Mueller soon and everyone is lawyering up. He’s even discussing pardon options. Could it possibly look any worse? Maybe have Putin over for dinner?

“Jeff Sessions is a friend and a strong conservative. I was proud to vote to confirm Jeff and to vigorously defend his confirmation, and I’m deeply gratified that we have a principled conservative like Jeff Sessions serving as Attorney General,” Cruz said in a statement, NBC News reported. “The stories being reported in the media tonight are false, Senator Cruz stated. My focus is and will remain on fighting every day to defend 28 million Texans in the U.S. Senate.” The Washington Post was circulating the rumor and as usual, it is crap. And I’m glad over this… we need Cruz in the Senate doing damage control right now.