Did You Notice THIS During Trump’s Victory Speech Last Night?

Ted Cruz won Texas, Oklahoma and Alaska[1] yesterday in the Super Tuesday race. Marco Rubio won Minnesota – not sure how that happened. Donald Trump was the big winner taking Alabama, Arkansas, Georgia, Massachusetts, Tennessee, Vermont and Virginia. Delegate counts currently stand at: Trump – 316, Cruz – 226 and Rubio – 106. So you can see, this is far from over. Trump took his victory lap, but did a curious thing while giving his speech… he praised Ted Cruz and congratulated him on his hard work in Texas. Trump is now spinning himself as a unifier. We’ll see if that pans out. I don’t think it will ever happen now, but if he tapped Cruz as VP, he would crush Rubio and solidify the deal.

After what can only be described as a very successful Super Tuesday evening for presidential candidate Donald Trump, he took to the stage at his Mara-a-Lago resort to give a victory speech that was not only celebratory, but also conciliatory towards his GOP rivals.

In particular, Trump reached out to Texas Senator Ted Cruz and congratulated him for his hard work in Texas. “I do congratulate Ted Cruz, because I know how hard Ted worked in Texas,” he said.

And while Trump has identified himself as a “unifier” in the past, tonight it was a central theme to his message. “I am a unifer,” he said. “I would love to see the Republican Party and everybody get together and unify.”

I find it curious that suddenly Trump is acting like he is taking the high road. It’s another calculated move. He is appearing with his henchman Christie more and more. Chris Christie reminds me of a lap dog following his master around. It’s embarrassing. Can Trump unify us? So far, the answer is a resounding no. He’s massively divided the party. We could in fact get all the way to the convention and be fractured, paving the way for a brokered convention and setting the stage for the establishment’s chosen one, Rubio, to pounce. That would be bad. It will be interesting to see what Trump’s next moves are. I am having trouble figuring the guy out. What’s clear right now is this is in reality a two man race until the convention. Go Cruz! 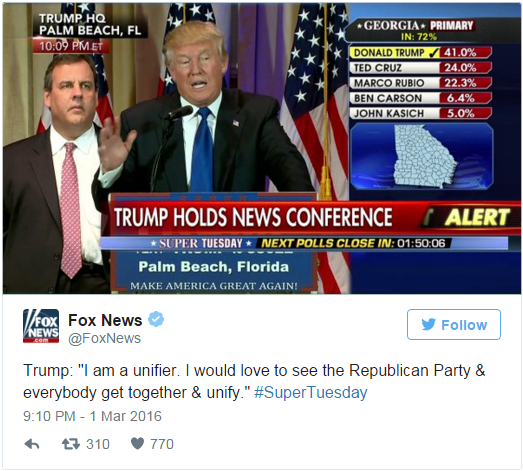 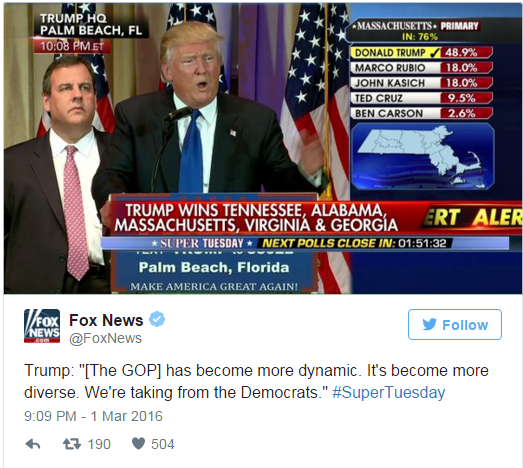 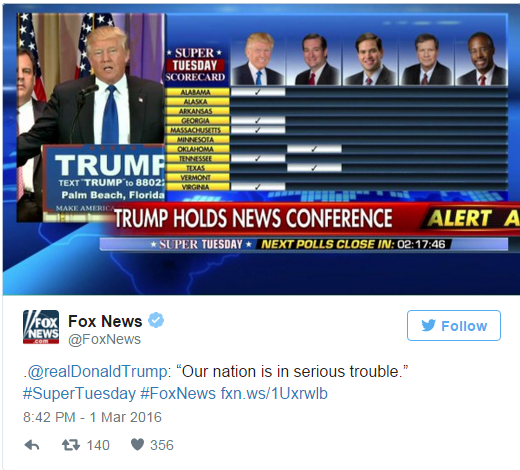