Oh Hell No! CNN Commentator Tells Why Violent Berkeley RIOT Should Be Blamed On Conservatives [VIDEO]

Apparently personal responsibility goes out the window when there’s a perfectly good (and innocent) political group to blame it on.

They’re all for free speech when it comes to bashing conservatives for things we didn’t do, but heaven forbid one of us wants to share our message at a college. 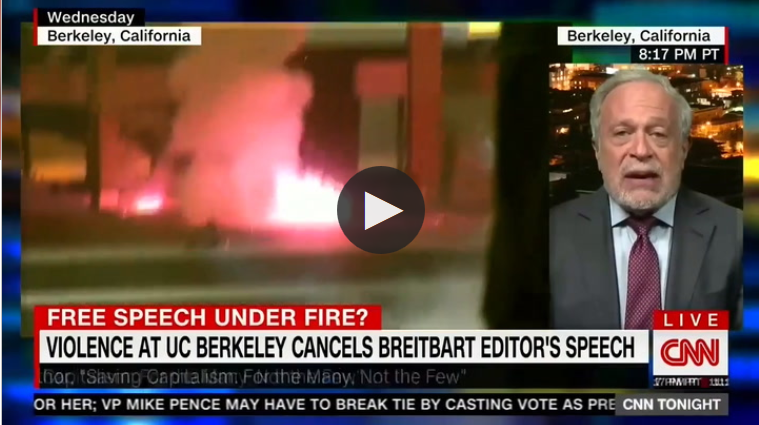 Violence broke out at UC Berkeley Wednesday evening[3] in response to a scheduled talk by conservative provocateur Milo Yiannopoulos, but now one CNN commentator is asserting that conservatives may have actually been behind it.

On Thursday evening, CNN’s Don Lemon invited former Secretary of Labor Robert Reich onto his show to discuss the riot, and Reich gave an interesting account of the incident:

“I was there for part of last night and I know what I saw and those people were not Berkeley students. Those were outsiders, agitators, I’ve never seen them before.”

It seems reasonable to question if Berkeley students would destroy their own campus in order to protest a speaker, and to suggest perhaps the most violent protesters were outsiders who were drawn to the campus to try to stop Milo. But Reich didn’t stop there, he continued, saying:

“You know, there’s rumors that they actually were right-wingers. They were part of a, kind of, a group that were organized and ready to create the kind of tumult and danger that forced the police to cancel the event.”

“You think this was a strategy by Yiannopoulos or right-wingers? They put this on so they could, in an effort to show, you know, there’s no free speech on a college campus? Like UC Berkeley?”

Robert Reich proceeded to double down on his inflammatory claim, saying:

“I don’t want to say factually, but I’ve heard that there was some relationship there between these people and the right-wing.”

Sometimes there are just no words.