Liberals will do anything they can to not only smear Donald Trump, but to smear his family as well. They’ll even resort to pulling up long-dead stories in an effort to make the Trump family look bad. This time, the media is going after Donald Trump, Jr. for a picture of him holding an elephant tail — but of course, they aren’t telling the entire truth[1]. 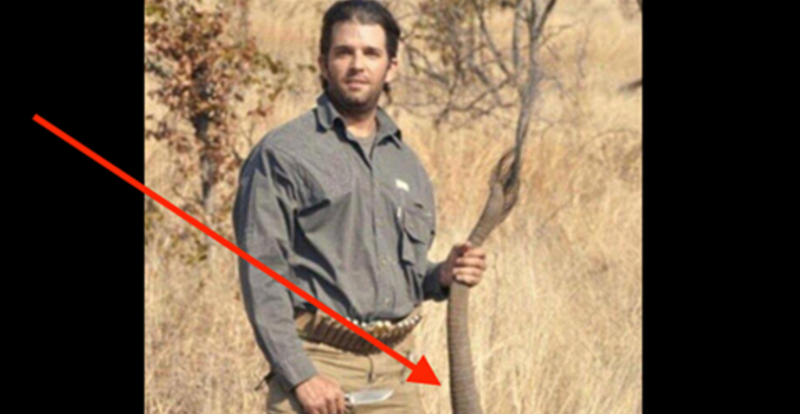 TMZ published photos of the Trump sons hunting in Africa, with one picture in particular getting attention: Donald Trump, Jr. holding an elephant tail. The sons were also photographed posing with a leopard, crocodile, Cape buffalo and other animals. TMZ published the photos, but didn’t give any background or context to them and called the two sons “pitiful bloodthirsty morons.” They also insinuated that the hunting trip may not have been fully legal. Now, the photo is going viral again, but the story behind it, unfortunately, is not.

Forbes did the journalistic work that TMZ would not and interviewed Trump, Jr. about the photos. According to Forbes, TMZ did not report that Africans frequently cut off the tails of dead elephants and make bracelets from the hair as a sign of respect and honor for the animal. TMZ also did not report that elephants in that particular area of Africa are over-populated, which is why the hunting of them is allowed. Otherwise, the population would continue to grow and their habitat would be destroyed, as elephants tend to rip down the forests they live in. Allowing the overpopulation to continue would mean allowing the elephant herd to die of starvation and disease.

The Zimbabwe Parks and Wildlife Management Authority also could have told TMZ, had they bothered to ask, that they manage the hunting permits on a scientific basis to carefully manage the ecosystem to the benefit of all species. In fact, the Director-General of the Zimbabwe Parks and Wildlife Management Authority, V. Chadenga, called the accusations against the Trumps “baseless” and said that the hunting trip the Trump sons took was legal. He also pointed out that there was no investigation into their hunt and that they went with a “registered outfitter” and were accompanied by “game rangers.”

But none of this will matter to a liberal media on a witch hunt, will it?