Oh, brother.[1] President Trump met Pope Francis today at the Vatican. He was joined by Melania and Ivanka. Both were stunning in black and veils (not the kind that go over the face thank you). Trump was gracious and very well presented. He gifted the Pope with a special edition of the works of Martin Luther King. The Pope gave Trump a copy of his 2015 encyclical, that I have written on and raved about previously. In it, the Pope preaches climate change extensively. SMH.

Obviously, the Pope is trying to pressure President Trump on climate change and pushing for him to remain part of the Paris Climate Accord. He’s not even being subtle about it. This is a far different meeting than when Ronald Reagan met with Pope John Paul II. Those two great men joined against atheistic communism and Russia… the evil empire. They had a great deal in common, whereas Trump and Pope Francis have very little they agree on. Certainly not how to deal with radical Islam and certainly not on climate change, refugees or illegal immigration. 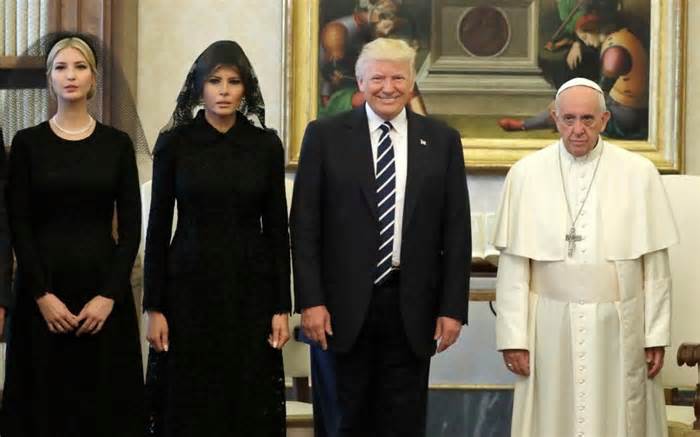 Francis gave the U.S. president a copy of his 2015 encyclical calling for urgent, drastic cuts in fossil-fuel emissions after a half-hour meeting in his private study.

Francis’s choice of gift suggests he is adding his voice to those pressing Trump not to renege on the Paris accord, which is the cornerstone of global efforts to limit climate change. The Vatican said in a statement that the talks focused on international affairs and the promotion of peace, with particular emphasis on health care, education and immigration.

“Thank you, thank you,” Trump told Francis as they shook hands after the meeting. “I won’t forget what you said.” Trump has said climate change might be a hoax perpetrated by the Chinese.

For his part, Trump gave Francis a special edition of the works of U.S. civil rights leader Martin Luther King.

And speaking of the Paris Climate Accord… Trump met with Italian Prime Minister Paolo Gentiloni later Wednesday before he travels to Brussels for a NATO meeting. He’ll be back in Italy again on Friday for talks with a group of seven leaders in Taormina, Sicily. The world’s biggest developed economies are expecting Trump to say whether he’ll keep the US in the Paris Climate Accord during the summit, Germany’s environment minister Barbara Hendricks, said Monday. I’ll bet the Pope is hoping that Trump reads his encyclical before the meeting and that is what he said to Trump. Just a guess.

Freshly elected French President Emmanuel Macron will also try to sway President Trump on climate change. This has the look and feel of a campaign to win Trump over to the dark green side of things. Germany and China are also putting pressure on Trump. But the most pressure on him is from Americans who do not want this climate change nonsense. I hope he listens to his people and not the G7. Pressure has also come from business groups, including 280 investors representing more than $17 trillion in assets who released a statement Monday saying climate change must be an “urgent priority” for all G-20 nations. Executives have warned that Trump would put US companies at a disadvantage if he pulled out of the pact. Not true and I think Trump is savvy enough to know that.

“It was an honor to be with the pope,” Trump told reporters later in the morning. “We had a fantastic meeting,” he added, without addressing a shouted question on whether they discussed climate change. The two men spoke for half an hour in the Pope’s private study. As well as the text on environmental protection, which Francis said he’s sent to all Roman Catholics, the Pope also gave Trump books on family and the joy of the gospel. He also gave Trump a medal made by a Roman artist depicting an olive. The Pope told Trump the olive is a symbol of peace. Trump stated we could all use peace. True… but not climate change fascism.