President Trump is keeping his word[1] to the ‘Angel Moms’ out there… those families who have lost loved ones to criminal illegal aliens. Funds used to advocate for these criminals under the Barack Obama administration have now been redirected to the Victims of Immigration Crime Engagement Office, where assistance will instead be given to the families of their victims. That is the right thing to do and I applaud it. President Trump has long voiced his concern for these families and victims of illegal aliens. Now, he’s doing something about it.

Trump called and visited these families. He recognized them at rallies and brought them on stage. He truly feels for them and I believe is seeking to right a tragic wrong here. These families should no longer feel “marginalized and without a voice.” It’s bad enough they lost someone they love, when it could have been prevented… but to then see these criminals protected and defended goes far beyond insult to injury. It is a travesty. Nothing will bring back their loved ones… but at least some justice will be done here and maybe the prevention of others dying needlessly. 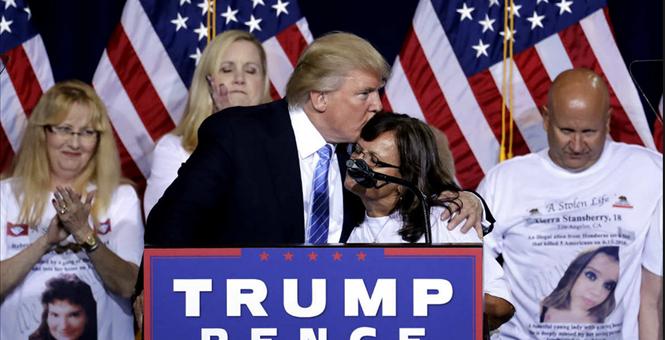 Speaking from the White House briefing room Tuesday, Press Secretary Sean Spicer announced the development of a new Immigration and Customs Enforcement office focused on helping victims of crimes committed by illegal aliens. The office will also assist family members of victims and is part of President Trump’s recent executive action to bolster enforcement of immigration laws already on the books.

“This office [Victims of Immigration Crime Engagement Office] will facilitate the engagement with victims and their families to ensure questions and concerns regarding immigration enforcement efforts are addressed,” Spicer said, adding that the establishment of the office fulfills a campaign promise.

Earlier today, Homeland Security Secretary John Kelly detailed the new office in a memo [4]to all relevant agencies inside DHS.

Further, Kelly immediately ordered the Director of ICE to “reallocate any and all resources that are currently used to advocate on behalf of illegal aliens to the new VOICE Office, and to immediately terminate the provision of such outreach or advocacy services to illegal aliens.”

No more advocacy for those that aren’t American citizens. Now, these thugs will be deported and with security on our borders, they won’t be back. I read this morning from Ted Cruz, that just the fact that Trump has been elected has caused the number of aliens coming over our borders to drop by 50%. Imagine what will happen when the wall is in place and there are drones and agents patrolling it.

I think it is a mistake to keep DACA in place, but every other illegal alien is now subject to deportation. I’ll take it. With 10,000 new ICE agents and 5,000 more Border Patrol agents coming on, there is going to be a heck of a lot of deportations ramping up. I also understand that services such as welfare are being cut off to illegal aliens as it should be. The rule of law will be observed once more and criminals will be treated like criminals. Lives and money will be saved and our sovereignty reinstated… it’s a very good start towards making America great again.