In a photo taken of President Trump, standing alongside daughter Ivanka and two of the girls kidnapped by Boko Haram in 2014, Joy Bishara and Lydia Pogu, you can see the opportunity present, if you were looking to capitalize on some major P.R.. These two Chibok girls both were able to escape their captors…That’s a big deal[1].

But the really essential component here is that President Trump did not alert the media that this meeting was going down. He just did it.

He didn’t advertise the sit-down and the press – who would have fawned all over Obama’s PR plays, were not invited. Good riddance. 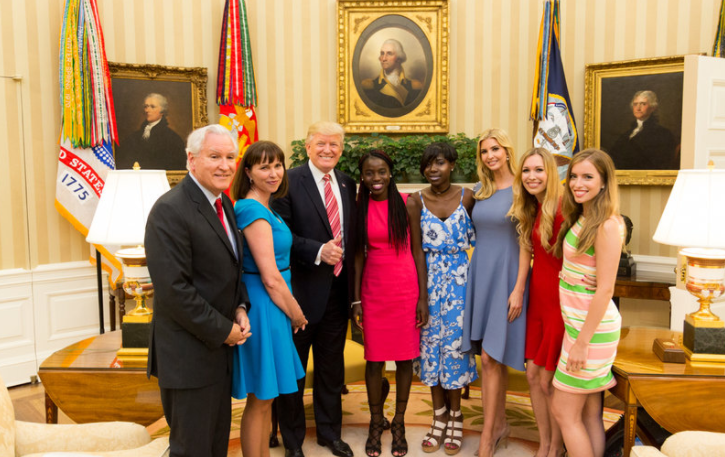 The President and Ivanka were connected to the girls through Doug Wead, the other gentleman in the shot. Wead was an assistant to President George H. W. Bush and is the current president of Canyonville Christian Academy, where these two young women now attend to continue their education.

This is so moving:

“Wead said the girls had some issues they wanted to discuss privately with the president, but neither he nor the girls would share details about what was said during the ten-minute meeting. Bishara did note that Ivanka hugged her and the President Trump smiled and said, ‘God bless you, too.’”

The girls anticipated that their trip to the White House would increase the help desperately needed to for the 113 Chibok girls who are still held captive by the terrorist group, Boko Haram for more than three years later.

“Pogu and Bishara were two of 276 schoolgirls in the town of Chibok captured by the extremists. They escaped by jumping off a moving truck that the extremists were using to transport them, the girls told People in an interview…”

Boko Haram had gone ahead and released 82 of the Chibok girls in May after more than three years of subjugation. The group also gave up 21 of the kidnapped schoolgirls in October 2016. One student was actually able to escape with her baby in May 2016.