President Donald Trump isn’t going to let the latest hubbub regarding what he may or may not have said to a Gold Star mother (according to a lying, sneaking, eavesdropping circus clown) get in the way of what really matters to him: America.

While he’s spoke out against National Football League players kneeling for the National Anthem in the past, it would appear that the League and commissioner Roger Goodell specifically, have had a difficult time trying to come up with a practical solution. Despite the fact that Goodell has spent two days in New York with all of the team owners to discuss the issue, they have yet to come to a satisfactory conclusion.

That’s where Trump stepped in. 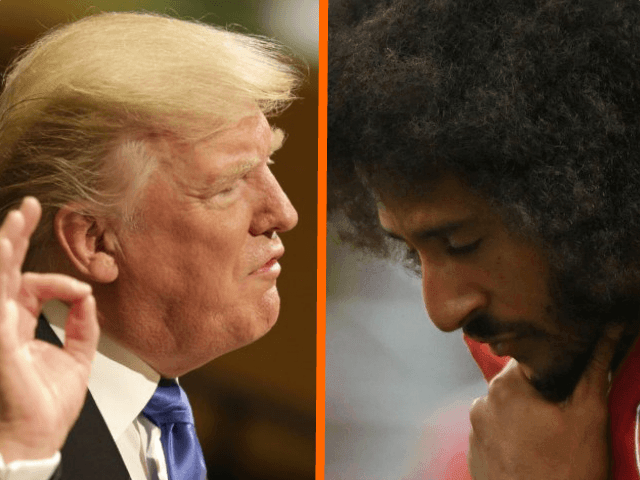 Instead of taking to the podium again, he decided on a petition. This will put a definitive number to the large group of people who have become displeased with the NFL over these unpatriotic protests.

The “Make America Great Again Committee” has posted the petition[2] to the GOP.com website and asks you to stand with President Trump in calling for the football players to stand for the anthem.

This comes after Goodell met with the team owners. He has said in the past that he would “encourage” players to stand for the anthem, but ultimately there would be no penalty for not doing so.

The NFL has decided that it will not force players to stand for the playing of our National Anthem. Total disrespect for our great country!

Before anyone screeches about the “FIRST AMENDMENT,” keep in mind that he is not punishing these players. He’s not proposing a law. All he wants to do is show exactly how much support he has in calling for these players to stand. The NFL has seen a dip in viewership, but it has not prompted any serious change. Hopefully this would give us a number to point to so we can say, “Hey, you’ve driven *insert number here* people away from your game by allowing them to do something that is largely perceived as extremely disrespectful.”

We live in a society where perception is reality and whether the initial goal was to be disrespectful to the flag (one could argue that Kaepernick’s statements explaining his actions were extremely rude), that’s how it comes off to millions of Americans. That is why they believe that they have been prompted to turn the channel whenever a football game comes on. They feel like they have been forced to choose between their love of the game and their love of country, and it’s not fair to them.

Hopefully this will bring some perspective to the situation and will drive home the large number of people who want to see change enacted within the League’s anthem policy.