President Trump: Why Is NFL Getting Tax Breaks While Disrespecting The Country? CHANGE TAX LAW! [VIDEO]

President Trump just made an excellent point. Because NFL teams are so disrespectful to America, her flag, the National Anthem, police, military and first responders, Trump is calling for their special tax breaks to be yanked. I think that is a fantastic idea. And it should be done not just at the federal level, but the state and local levels as well. “Why is the NFL getting massive tax breaks while at the same time disrespecting our Anthem, Flag and Country?” Trump asked. “Change tax law!” Personally, I don’t think they should have been receiving tax breaks to begin with. Sports is a cash cow, so why do you need to subsidize them? With the debt we have in this nation, that needs to stop.

Evidently, team owners are given huge tax breaks from local, state and federal officials. Why? To build big, beautiful stadiums where they can fleece fans for tickets that cost hundreds of dollars each and to sell them food that is outrageously priced. It’s meant as an incentive to keep professional football teams in these towns. In other words, they are bribed to make a city their home. That just should not be allowed. 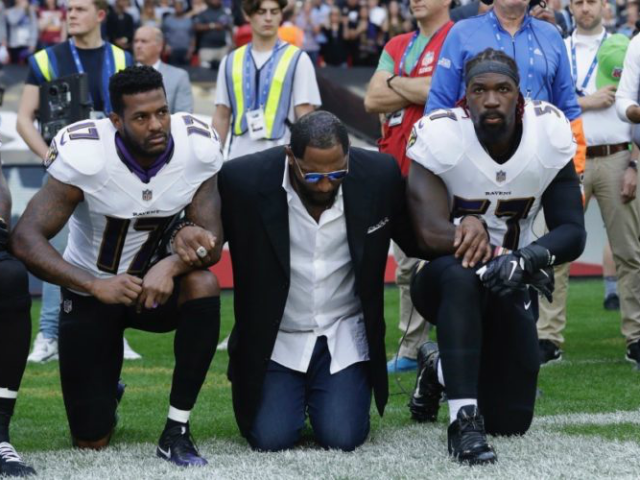 Tucker Carlson of Fox News highlighted the issue on his show. He covered special tax loopholes for the NFL and a bill sponsored by Congressman Matt Gaetz to end special tax breaks for the NFL. Gaetz made the point that Congress should not be subsidizing the NFL with tax breaks “particularly when the NFL league office has embraced this unpatriotic behavior.” Amen to that. Twice.

The NFL gave up their non-profit status in 2015. But NFL stadiums have received an estimated $6.7 billion from taxpayers over the last two decades. That’s just obscene and insane. First, you’ve got the feds and the military paying the NFL to play the National Anthem… now you’ve got localities and the federal government paying them to be in their cities and building brand new stadiums with our tax dollars. Doesn’t anyone see something monumentally wrong with this scenario? I sure do.

Why is the NFL getting massive tax breaks while at the same time disrespecting our Anthem, Flag and Country? Change tax law!

For instance, Nevada paid in excess of $750 million for the Raiders stadium in Las Vegas. I suppose, having tourism as your biggest draw, this would help the hotels and casinos, but it seems extravagant to me. They already had a stadium there. I’m sure this funding is showing up in property taxes and license fees somewhere and I’m equally sure that most Nevadans don’t want this. Not every team has received public money. The stadium the Jets and Giants share in New Jersey was financed privately, and the stadium the Rams and Chargers will share in Los Angeles is being financed privately as well. That’s the way it should be.