As President Donald Trump moved about the day as the 45th president of the United States, the First Family has been inseparable and right there by his side.

It was during the signing ceremony, the first acts as the new President, that refreshing moments of frivolity[1] from President Trump and his family were seen — and it was a nice reminder that behind the formality and in this case, the rough exterior, the President and his family are people – just like the rest of us.

Playing along in the good humor of the room was President Trump’s 10 year-old son, Barron, who was seen by cameras being the world’s best uncle ever to half-sister Ivanka’s youngest son, Teddy: 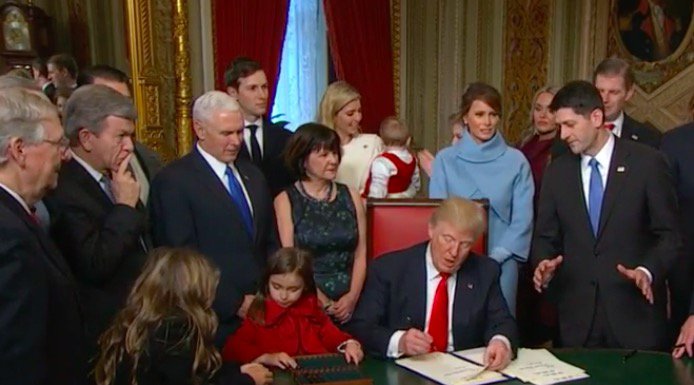 Teddy has yet to reach one and Barron succeed in sneaking up behind his mom — the First Lady — to keep his little nephew amused throughout the long morning. Barron even succeed in getting a laugh out of Ivanka.

When the camera started panning out to get a shot of the whole family, Barron was seen still goofing around with his nephew Teddy, while even managing to get everyone that saw him to smile and enjoy the antics. Even Twitter users were pleased with the young man’s actions:

Baron playing with his nephew in the back is adorbs… and I finally saw him smiles, which makes me happy.

No family is perfect. None are meant to be. But anyone that is honest can see that this family loves each other, just like we love ours. If there is anything that we as a people can come together on, it should be family.