President Trump made a big deal[1] of calling NATO ‘obsolete’. I have always strongly disagreed with that. NATO is necessary for the protection of member countries against dictators, tyrants and terrorists. Trump did have a point that the member nations are not paying their fair share for the defense capabilities of the organization. Trump has now reversed his opinion of NATO and is calling on them to focus more on terrorism than Russia. I’m all for fighting terrorism, but lessening pressure on Russia is a mistake and short-sighted.

Russia is the biggest threat on the planet currently. I know many will disagree and say it is ISIS. The reason I say Russia is comes from several basic points. The four biggest national threats on the planet come from Russia, Iran, China and North Korea currently. Russia has a huge military footprint and is a world power. ISIS, though barbaric and deadly, is very small compared to the Russian threat and Russia uses ISIS as a proxy in the Middle East to fight fronts where Russia wants to gain ground, eradicate enemies or obtain energy resources. NATO stands against Russia and many countries see them as their biggest protection from encroachment by the Russkies. 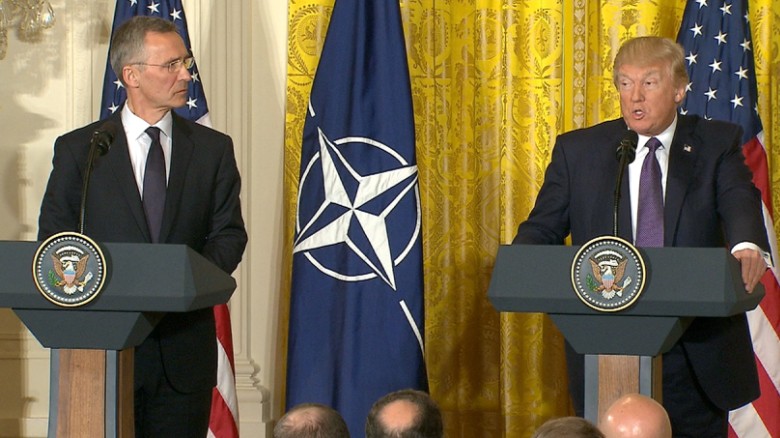 President Donald Trump reversed his repeatedly stated view that NATO is obsolete during a joint press conference with NATO’s general secretary on Wednesday at the White House.

The president told reporters that he and NATO Secretary-General Jens Stoltenberg had a productive meeting during which he was able to address his two main problems with NATO: Not enough focus on fighting terrorism and the failure of most member states to pay their fair share.

“The secretary-general and I had a productive discussion about what more NATO can do in the fight against terrorism,” Trump said. “I complained about that a long time ago and they made a change, and now they do fight terrorism. I said it was obsolete. It’s no longer obsolete.”

During the presidential primaries, Trump made waves[3] among NATO member nations and Republicans and Democrats alike when he pronounced NATO obsolete.

President Trump does not see Russia for the threat it is. Lately, he has come closer to realizing the existential threat the Russian bear really is. I may disagree with Trump’s emphasis for NATO, but at least we both agree they are needed now. I don’t understand why it is so complicated to get the member countries to pay their fair share to NATO. If it were me and they didn’t pay their dues, they would not fall under the umbrella of our protection. Harsh, but necessary.

And this business of saying the Cold War is dead is dangerously foolish in the extreme. It did not end, it shifted. We have never stopped being enemies with Russia. They are not playing the same game we are right now and they are no fools by any means. Only five of the 28 nations that make up NATO currently hit that two percent contribution mark: the United States, Greece, Great Britain, Estonia and Poland. That has to change. And yes, by all means go after radical Islam, but don’t ignore the Russians, Iranians, the Chinese and the North Koreans. To do so is suicide. This is a step in the right direction, so I applaud it… but we should not be so naive as to say we only face terrorist threats and not geopolitical ones.

My statement on NATO being obsolete and disproportionately too expensive (and unfair) for the U.S. are now, finally, receiving plaudits!

"Russia will not go away," NATO Sec. Gen Stoltenberg says. "Russia will be our biggest neighbor and we have to find ways to live with them." pic.twitter.com/oVRgzjeSnt[8]