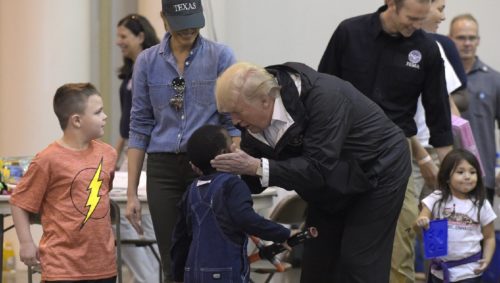 President Trump has been busy in Houston viewing the devastation, visiting with the people of greater Houston, helping to hand out supplies and encouraging the victims of Harvey. But his busy schedule did not prevent him from taking a shot at Hillary on Twitter. He shared a meme that has been making the rounds ever since Hillary released her new book, “What Happened.” The meme shows Hillary’s book next to another book with Trump on the cover and the title of it is “I Happened.” Of course it’s hilarious. Or is that Hillary-ious? See meme below.

As of Sunday morning, the meme has been retweeted 10,000 times and has 30,000 likes. The Twitter account that shared the meme also shared this other meme below.

Hillary Clinton and her supporters still cannot accept that they lost. Which brings us to her tour. She’s embarking on a 15-city tour entitled “Hillary Clinton Live.” Her website says that Hillary will tell attendees how she “coped with a shocking and devastating loss, and how she found the strength to pick herself back up afterwards.”

It continues, saying, “With humor and candor, she tells readers what it took to get back on her feet — the rituals, relationships, and reading that got her through, and what the experience has taught her about life. She speaks about the challenges of being a strong woman in the public eye, the criticism over her voice, age, and appearance, and the double standard confronting women in politics.”

It is said that admission to this fabulous event could cost as much as $1,200. So, let’s get this straight; Hillary may charge over a thousand dollars per person, to regale them with tales of her failed campaign, in other words, to pay lots of money to hear the Loser speak. And it seems like she’ll be playing the blame game as usual. She still believes she lost based on being a woman, her age, her appearance and her voice. And then the lucky attendees will get the treat of hearing how she coped. The coping strategies of those who lose are not particularly helpful or useful.