On Wednesday[1], a protester named Anne Seifert, who is 22 years-old, got into a fight outside of the Trump rally in Cedar Rapids, Iowa. She threw an egg, kicked and punched a man who was videoing the protesters. She has now been charged with assault over it and rightly so. She claimed the man was trying to provoke them. These moonbat protesters who have an insane hatred of President Trump, don’t need to be provoked. They are already unhinged.

Seifert was arrested without incident Wednesday evening near the U.S. Cellular Center, where Trump later addressed supporters. It doesn’t look like she has an attorney yet and the details are sketchy about her actions. Online court records show that Seifert was released from Linn County Jail on bond. She is charged with one count of assault. Cedar Rapids public safety spokesman Greg Buelow said that four people were cited for peddling at the rally and 17 protesters were escorted out of the event. All the while, Trump supporters chanted USA! USA!

CEDAR RAPIDS, Iowa – Authorities say a protester has been charged with assault after a fracas outside the rally in Cedar Rapids, Iowa, for President Donald Trump.

Police say 22-year-old Anne Seifert was arrested after Wednesday evening’s incident near the U.S. Cellular Center, where Trump later addressed supporters. A public phone listing for her couldn’t be found Friday. Online court records don’t list the name of an attorney who could comment for her.

Police say an officer saw Seifert throw an egg at a man and then punch and kick him. He had been filming the protesters and got into an argument with Seifert. Police say Seifert reported that she became upset because she thought the man had come across the street to provoke her and other protesters.

Cedar Rapids public safety spokesman Greg Buelow said a Cedar Rapids police officer heard a commotion in the 400 block of First Avenue East around 6:18 p.m. Wednesday. The officer saw a woman, later identified as Anne M. Seifert, 22, of Cedar Rapids, throw an egg at a man, hitting him in the chest. Seifert then charged the man, punched him several times and kicked him in both of his shins, Buelow said. The man did not hit Seifert or even try to defend himself.

I’m sure this woman will just get a slap on the wrist for this, but it shows how unstable she is. I wonder if she was paid to be there? At any rate, she’s obviously a radical leftist and that guy is lucky she didn’t truly hurt him. More fun and games at Trump rallies. 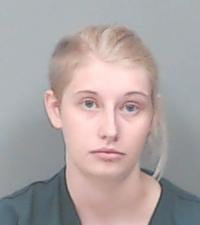