Michael Reagan is not bashful.[1] He doesn’t care for Donald Trump and he firmly believes his father wouldn’t have either. Michael won’t be voting for Trump in the California Primary. He believes, like I do, the media has propelled Trump into the nomination. The Republican Party is not the party of Ronald Reagan any more. They have become the Whigs and are a monstrous joke. The Republicans no longer represent the Constitution, smaller government, limited spending or restricted taxation. They have become a reality TV party just like the Democrats and all of them are being taken for a ride by a conman and huckster. This is sheer populism and it won’t end well. 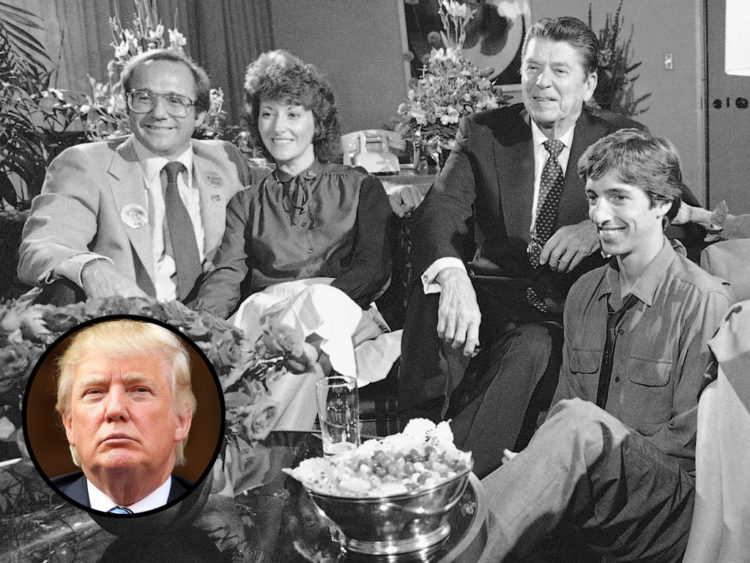 Conservatives often invoke the name of the late former President Ronald Reagan when talking about their ideals both for candidates and in terms of policy. This election cycle, some have suggested that due to his appeal to working-class voters, Donald Trump may have some “Reaganesque” qualities.

But one person who doesn’t think so is Reagan’s son, Michael.

Michael Reagan, a staunch conservative and longtime media pundit, said during an interview[3] Monday with Newsmax TV’s Steve Malzberg that not only will he not be voting for the New York billionaire in the California Republican primary, he does not think his father would have, either.

As Paul Kengor pointed out[4], Reagan called communists liars and cheaters. Donald Trump calls conservatives like Ted Cruz liars and cheaters. I personally believe that a strong constitutionalist like Reagan would have been horrified by Trump’s disregard of our founding documents and his inherent thuggishness. Michael Reagan went on to say: “My father would not vote for Donald Trump in tomorrow’s primary in California,” the younger Reagan said of the late president. “And he may even say, ‘I didn’t leave the party. The party left me.’” That’s exactly right. Kengor went on to say[5] that Reagan did the intellectual heavy lifting that facilitated his full conversion from a 1940s New Deal FDR liberal to a conservative trying to save the Republican Party from the Rockefeller Republicans who were not conservatives. Trump is instead ripping the party apart and going backwards, or worse yet, off in a tyrannical direction that we will not survive. Trump’s “definition” is, in short, anything but a picture of conservatism. Kengor gets it exactly right. Trump is a non-conservative exploiting a conservative movement in order to try his hand at getting elected president via the Republican Party — the party of Reagan conservatism. No wonder Michael Reagan won’t vote for him and he’s right… Ronald Reagan wouldn’t have either.