REVEALED: We Just Found Out Who’ll Pay for the Border Wall – and It’s Not Mexico…

There’s a ton of news flying around[1] out there this morning. Everything from Michael Flynn resigning, to Trump now deciding to renegotiate NAFTA (which I believe is connected to the wall). Mexico was never ever going to pay for the border wall up front. That was a foregone conclusion and logical. There are many ways to recoup the cost of the wall: tariffs (which I abhor) and entrance fees are just two of the ways it can be accomplished. However, the issue at hand is how we afford the $21.6 billion it will take to build the wall over three years to begin with. Well, if President Trump does indeed cut off funding to sanctuary campuses, cities and states, the saved tax revenue alone will pay for the wall. It’s a win-win as far as I’m concerned.

The map below shows a number of sanctuary cities – but that is from 2014. For a map[2] that really shows just how many there are, go here[3]. Billions of dollars would be saved by cutting off that funding. Far more than what the wall would cost. Several years ago, Congress supposedly set aside funds for that wall as well. I’d like to know where that money is. 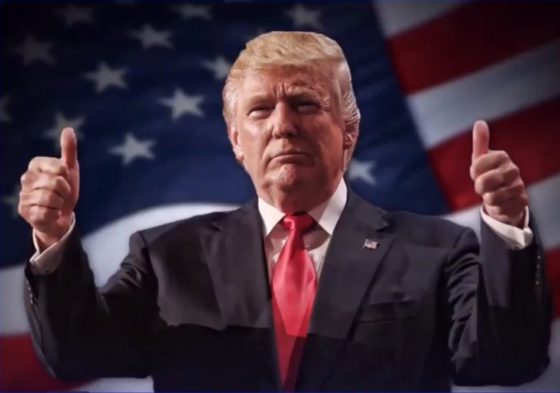 There are over 300 jurisdictions identified by Immigration Customs Enforcement that have the “sanctuary” designation – those which shield illegal immigrants from federal immigration authorities for solely committing immigration-related crimes (though others shield them from more. New York City Mayor Bill de Blasio[5] said he wouldn’t even report an illegal immigrant who was caught drunk driving). 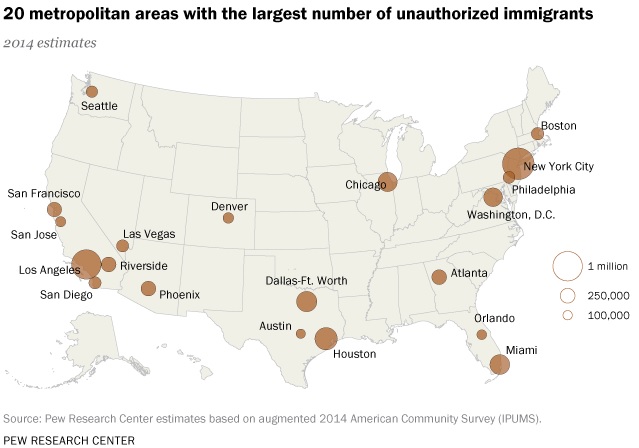 Donald Trump has already threatened on multiple occasions to defund cities that keep their sanctuary status, and if he follows through, it’ll free up enough tax revenue to fund the entire construction of the wall within just a year. Check out what’s at stake for those cities: 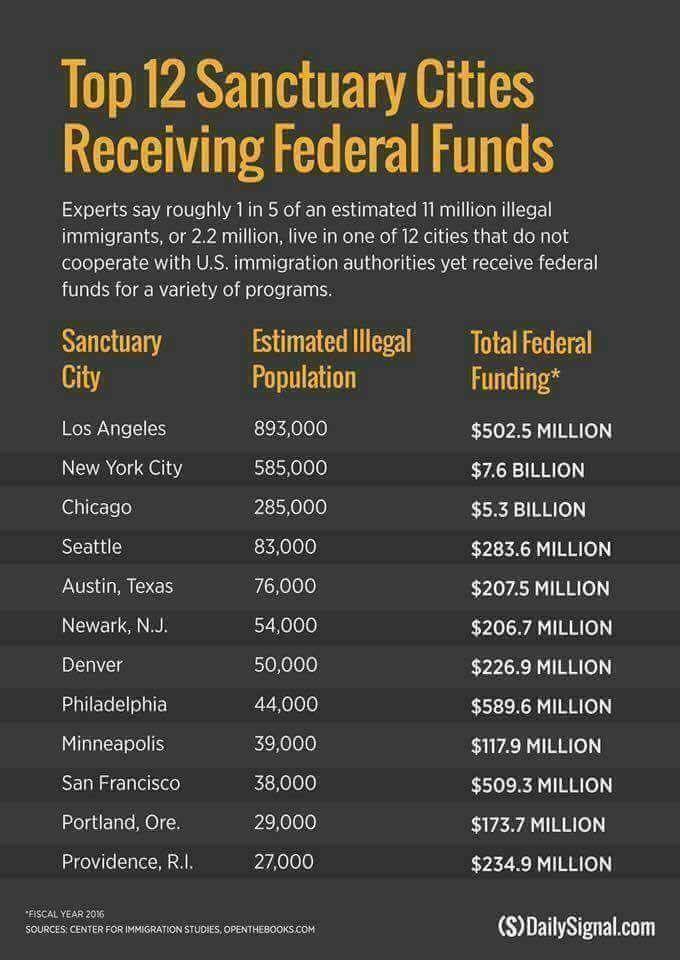 Also stated above is that there are somewhere between 11 and 15 billion illegal aliens in the US. I think it is double that. According to the Daily Signal, just 106 of the nation’s sanctuary cities have received a total of $27 billion in federal funding – while the estimated cost of the wall has ranged from $10 billion to $25 billion. This is easy math and I believe that President Trump sees this and knows it is the way to go.

Some states such as Texas have also proactively cut off funding in their states to cities that harbor illegal aliens and flaunt the rule of law. While we are at it, anyone here illegally should immediately be stripped of all bennies, such as welfare, food stamps, insurance, healthcare, etc. There’s another huge savings to be had there and bonus… many would self-deport. Mexico will eventually pay for the wall, but in the beginning, those that break the law will fund it. I call that poetic justice.