Rubio THREATENS a “reckoning” for conservatives who support Trump

This happened on Monday, and it was a radio hit Marco Rubio did on the Mike Gallagher Show. The clip goes about four and a half minutes and it’s a pretty damning indictment of Trump starting with the Corey Lewandowski-Michelle Fields mess and going forward with the oft-mentioned #NeverTrump movement and his potential membership in it. 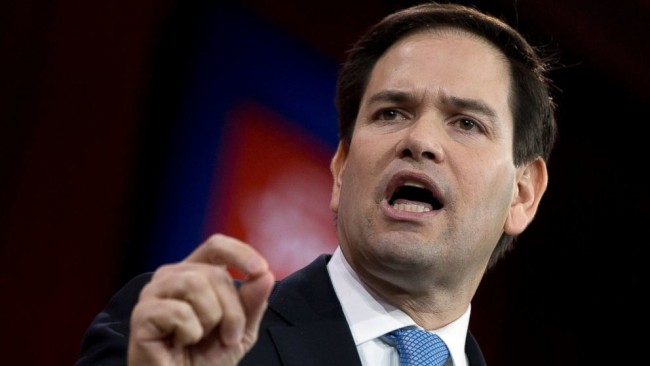 And it’s Rubio’s contention that if the conservatives who make up the bulk of the Republican Party’s voters allow Donald Trump to get the nomination, there will be a major wakeup call when they find out what they’ve bought.

That language might be a bit overwrought, but on the other hand Rubio and Ted Cruz have taken Trump to task in each of the last three debates for his lack of fealty to, or even knowledge of, the conservative positions on major issues. It’s worth debating with respect to some of them whether Trump represents an opportunity to revisit some of those standards to see if they need updating, but then again what has Trump done to present a cogent plan for resolving them that his contemporaries or forebears haven’t already brought to the table?

It’s Rubio’s contention that Trump isn’t a conservative, and that he’s not worthy of putting in charge of protecting a constitutional republic. Rubio might be right. But if it comes down to Trump and Hillary, is Rubio willing to go full #NeverTrump and support a conservative jailbreak from the GOP? And is that a good idea?

At Hot Air, Allahpundit is less than sanguine about the concept[2].

What he says here about a “reckoning” for pro-Trump conservatives is something I hear all the time from righties on social media, incidentally. “We’re making a list!” they cry, naming all of the so-called movement conservatives who have embraced their inner nationalist this year and clambered aboard the Trump train. Fantasies of recriminations against the traitors will keep you warm on those cold, solitary nights in the wilderness, but are they realistic?

An anti-Trump bolt [to a third party] will appeal to ideological conservatives, to libertarian leaners, and to the most religiously observant Republicans: what Republican strategist Grover Norquist has called the “leave us alone coalition.” What happens if that coalition does not run strongly in 2016? If it picks up something more like John Anderson’s 1980 6.6 percent of the vote, rather than Ross Perot’s nearly 20 percent? John Anderson ran as a liberal Republican who could not accept Ronald Reagan’s leadership—a group we have not heard much from since 1980. That’s the risk of political tests of strength: Sometimes you lose, and afterward nobody fears you ever again.

A “true conservative” independent race for president may offer anti-Trump Republicans a way to vote their consciences without endorsing Hillary Clinton. But it may also expose “true conservatism” as a smaller factor in U.S. presidential politics than it’s been regarded as since the advent of the Tea Party. And it will leave the instrumentalities of the GOP in the hands of people who were willing to work with Trump, and whose interest post-Trump-defeat will be in adapting his legacy to the future rather than jettisoning it.

“’Lending’ the Republican Party to Trump for the next six months might mean you never get it back,” Allahpundit says.

One thing which is true of this presidential cycle is that all of the sure things taken for granted in American politics aren’t so sure anymore, and people had better take note of that before making any rash decisions. Another thing which is true is that if Rubio is so bound and determined to keep Trump away from the GOP nomination he’s going to have a decision coming soon – namely, he’s going to need to vacate the race and back Ted Cruz in an effort to make the latter the nominee. Win or lose in Florida, Rubio doesn’t have a path to the presidency anymore this cycle.