Russians Mint $10,000 Coin with Trump’s Face On It, But Is That A Spelling Mistake?

This must be the Russian version[1] of the infamous ‘Reset Button’. Heh. A Russian mining company (connected of course to the Kremlin) has minted a $10,000 coin in honor of Trump’s Inauguration. It has Donald Trump’s face on one side, with Donald John Trump’s name and the words: ’45 The President United States Of America’… bad English, but you get the drift. The other side is even more entertaining with the Statue of Liberty and the words: ‘In Trump We Trust’ and the kicker: ‘United States Of Amerika’. Catch the spelling of America – correct on one side, misspelled intentionally on the other. I guess Russia thinks we should put out trust in Trump and not in God. More poking of the American badger.[2]

You have to look closely, I missed the subtlety of it the first time too. This is going to drive the left bug nuts and they are going to scream even louder accusing Trump of being in bed with Putin. I’m sure one was sent to Trump as a gift, which he will probably find amusing. It was manufactured by Art-Grani. 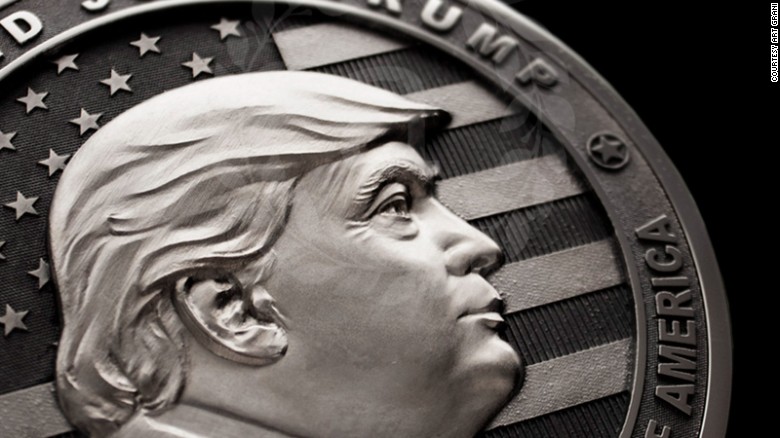 A Russian manufacturing company has minted a $10,000 coin to commemorate the inauguration of Donald Trump as president.

The coin was manufactured by Art Grani and features the face of Trump on one side, with the Statue of Liberty and the words “In Trump we trust” on the other.

“The inauguration of Donald Trump will be a special event in the history of the world, that’s why we have done a collection,” Art Grani Sales Manager Kristina Glinina told CNN[4].

Despite the steep price of the coin, the company expects the limited edition to sell quickly. Just 45 coins were made[5]: 25 made of silver, five of gold and 15 made of silver and gold.

A similar collection with the face of Russian President Vladimir Putin were created after Russia’s annexation of Crimea in 2014.

“We see our mission as immortalizing in metal the bright events of history and modernity, not only in our country but of the whole world,” Glinina told CNN.

Only 45 coins were made: 25 made of silver, five of gold and 15 made of silver and gold. The coins, the company says, are the perfect “unique gift for your boss, key partners or clients.” After Russia’s annexation of Crimea from Ukraine in 2014, Art-Grani minted coins with the face of Russian President Vladimir Putin. They sold very well and they made a tidy profit. The coins weigh about two pounds each.

Vladimir Vasyukhin[6], director of the “Art-Grani” company about 650 miles east of Moscow, in south-central Russia’s Chelyabinsk region, told APTN, “there are more hopes associated with Trump with regards to the lifting of sanctions; maybe the environment (between the US and Russia) will change.”

APTN reports that Art-Grani is keen to present the first of the coins to Mr. Trump and they’ve reached out to Russian diplomats and business partners in the US to help arrange the presentation. Definitely from Russia with love. 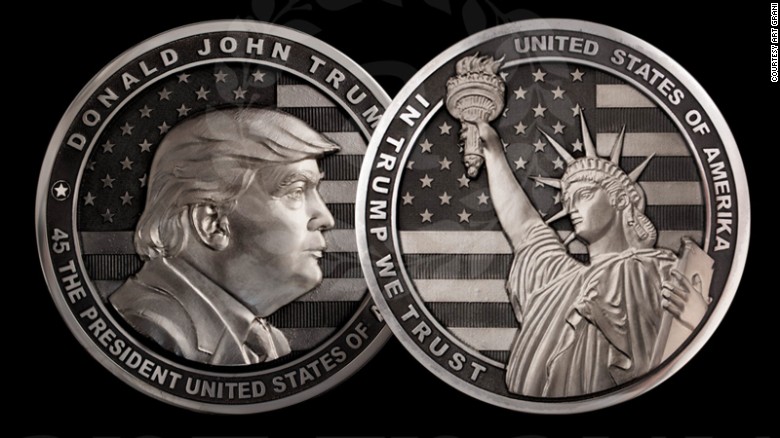