White House Press Secretary Sarah Huckabee Sanders literally demolished an arrogant reporter who was challenging President Trump on being part of the grand opening of the Mississippi Civil Rights Museum this weekend. In a briefing that was held yesterday, she more than held her own with the media. A reporter asked during the Q and A if Trump visiting the museum was appropriate or even a good idea. American Urban Radio reporter April Ryan asked about various members of the NAACP and black ministers who are protesting the visit.

“There are comments from people from the NAACP from black ministers who are planning on protesting and boycotting this weekend for the President’s visit to the Civil Rights Museum. What say you?” Ryan bluntly asked. Talk about insulting. What a racist jerk. Sanders called the pending protests very ‘sad’. She added: “I think that would be honestly very sad. I think this is something that should bring the country together, to celebrate the opening of this museum and highlighting civil rights movement and the progress that we’ve made and I would hope those individuals join in instead of protesting.” 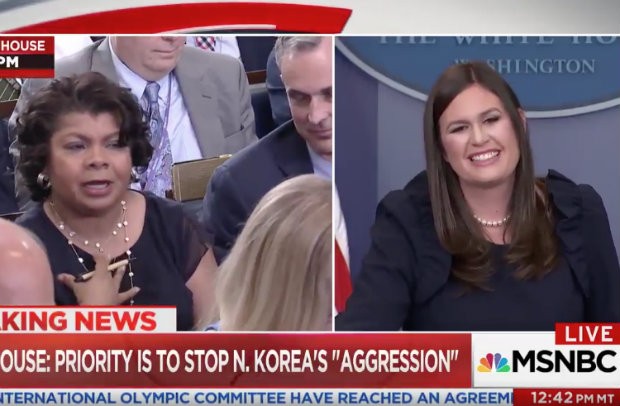 This same reporter just kept on with the rudeness by asking if Trump’s statement on the riots in Charlottesville would be seen as an “insult” to those in attendance. Ryan said, “They take it as an insult that he’s coming. As we’ve had issues of Charlottesville. The President didn’t get his statement straight on Charlottesville…” At the time, President Trump spoke passionately about that, rebuking both extremes on the left and the right. The NAACP is furious that the President didn’t stick to just condemning the KKK. He condemned them, Antifa and Black Lives Matter and that has them furious.

It was right about at this point that Sanders had had enough. “I think his statement was very clear. He made it very clear. He’s against violence and bigotry,” she stated emphatically. After the riots in Charlottesville, President Trump said, “We condemn in the strongest possible terms this egregious display of hatred, bigotry and violence on many sides.” Trump put that perfectly. President Trump released another statement soon thereafter stating: “Racism is evil. And those who cause violence in its name are criminals and thugs, including KKK, Neo-Nazis, White Supremacists, and other hate groups are repugnant to everything we hold dear as Americans. Those who spread violence in the name of bigotry strike at the very core of America.”

“President Trump’s statements and policies regarding the protection and enforcement of civil rights have been abysmal,” NAACP President and CEO Derrick Johnson said in a statement. He called Trump’s planned attendance “an affront to the veterans of the civil rights movement.” “He has created a commission to reinforce voter suppression, refused to denounce white supremacists, and overall, has created a racially hostile climate in this nation,” Johnson added. Nice try, but none of that is true and he knows it. Groups such as the NAACP have made a mockery of the civil rights movement.

Sanders once again dropped a nuke on these smug reporters, just as she should have. Keep up the good work, Sarah.