SHAME! George Clooney Tries To Clown On Trump – But Makes DUMB Mistake Instead!

Another day[1], another idiotic celebrity who is outraged at President-elect Donald Trump. Sigh. George Clooney has made hundreds of millions in his career. You would think he would be a bit smarter than this. I think his emotions got ahead of his brain. After Trump’s retort to Meryl Streep’s caustic trashing of him on the Golden Globe Awards, Clooney couldn’t contain himself: “Aren’t you supposed to be running the country?” Clooney asked Trump rhetorically, according to People[2] magazine. Dude, in case you haven’t noticed, he’s not in office yet. I know we are all breathless and can’t wait for the Marxist-in-Chief to be gone, but come on!

Actually, I’m a bit surprised. Clooney himself has said he hopes Trump succeeds. He must have really hit a nerve with Streep. But she had it coming and then some. What can you expect though… Clooney is an uber liberal. He was at the Clooney Foundation for Justice when he made the remarks. That tells you an awful lot right there. Clooney is considered one of the more intelligent Hollywood elites, but you wouldn’t know it by this comment.

Trump, as usual, took to social media to respond to the actress’s insults and called her “overrated[5],” which apparently offended Clooney, who in turn sarcastically asked Trump a rhetorical question, but he obviously forgot one important detail before doing so.

“Aren’t you supposed to be running the country?” Clooney said to Trump at a reception hosted by the Clooney Foundation for Justice on Monday, according to People magazine.[6]

We’re ready for Obama’s term to be over, too, but that doesn’t change the fact that he is still in the White House and running the country … into the ground. 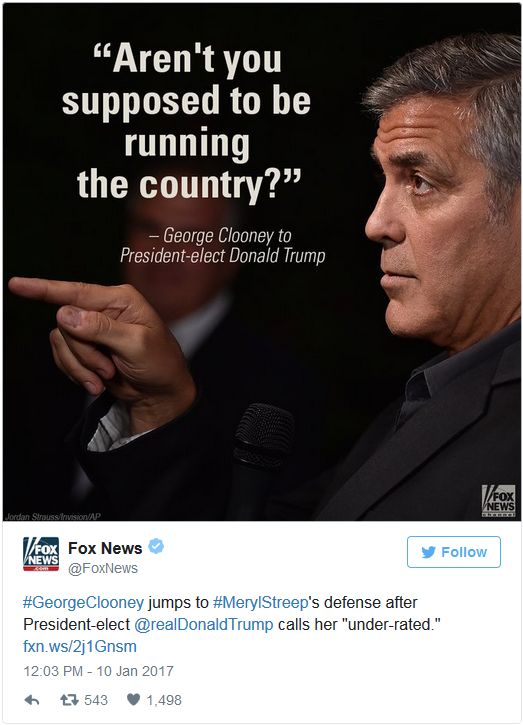 Right after the election, when asked how the country should be healed, Clooney said this: “We have to get back to talking and telling the truth, understanding that not everybody is an enemy, and that not all people who voted for Donald Trump are bigots — not even the overwhelming number of people who voted for Donald Trump,” Clooney said, according to Deadline.com[9]. “They’re disenfranchised, they’re mad, they’re losing their jobs.” That is correct and astute.

Clooney’s production company is now working on a feature-film version of the story of the Syrian Civil Defense “White Helmets,” search-and-rescue teams who have gained international recognition for rescuing people from bombed-out buildings in the Syrian city of Aleppo. He and his lawyer wife, Amal Clooney, have given their support to the Netflix-backed documentary, which is on the 10-strong Academy Awards shortlist for best documentary short. Clooney said that as a celebrity, “I can’t change policy … but I can make things louder. The White Helmets are the heroes. So if I can help them out at all, and people can know about it, in any way possible, that’s a good use of celebrity, I think.”

You know what would be a better use of celebrity? Supporting the President-elect and America. Clooney’s wife is Muslim and he seems very entangled in Islamic issues. Perhaps he should pay a bit more attention to American ones and consider his words carefully before he attacks Trump.