Even people who hate Donald Trump have to admit that this is an admirable show of respect to a former President.

It’s not a shocker that this video has gone absolutely viral, as I doubt we’d see this kind of respect from any other President, especially a Democrat. 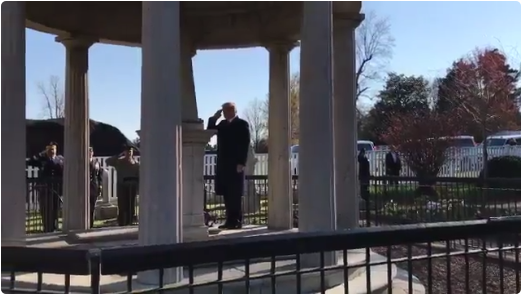 He then reportedly placed a wreath on the tomb in honor of America’s seventh president — a man whom Trump has often likened to himself[3] as per their blunt temperaments and shared mission to give voice to the frustrations of working-class Americans.

In a 10-minute speech[4] following his salute of the former president’s tomb, Trump noted that, much like himself, Jackson had been a true “people’s president.”

“Andrew Jackson was the people’s president and his election came at a time when the vote was finally being extended to those who did not own property,” he said. “To clean out the bureaucracy, Jackson removed 10 percent of the federal workforce. He launched a campaign to sweep out government corruption totally. He didn’t want government corruption.”

I think I can handle four more years of this. I wasn’t a Trump fan at first and I’m still quite skeptical, but he’s going to quickly win me over with things like this.