I have watched Jackie Evancho for years…[1] ever since she was eight years-old and came on the scene as a gifted singer. She is a prodigy and an incredible choice for President-elect Donald Trump’s Inauguration. So, of course the left has now bared its claws and is going for Jackie, who is all of 16 by the way. They say this will end her career… no, it won’t. After coming in second on “America’s Got Talent” in 2010, she was invited to sing for President Barack Obama at the National Christmas Tree Lighting. She performed for the Obama Administration at the National Prayer Breakfast in 2012, as well. Attacking Jackie this way is hypocritical and just plain ole mean.

The left was extremely catty making fun of Jackie being runner up on “America’s Got Talent.” She is a world-class singer and as I understand it, a world-renowned opera singer will be performing with her. Do they honestly think that Donald Trump didn’t have his pick of incredible talent out there? These idiots are delusional. Jackie was chosen because she has the voice of an angel and is a stunning talent.

Jackie Evancho has an impressive resume for only being 16 years old. Now, the teen singing phenom famous for being runner-up on “America’s Got Talent” has accepted an invitation to sing for President-elect Donald Trump.

The announcement came on Wednesday morning while she was on the “Today” show. She told[4] the co-hosts:

“I feel really honored. To be able to sing for the office – it’s a great honor for me.”

While Jackie may feel it’s an “honor,” not everyone seems to agree with her.

After the announcement of her upcoming performance, she became the target of political attacks.

In an interview with People Now, the young singer described another reason her family has seen a lot of hate. She said[5]:

“My family is kind of a big target. I have a transgender sister and so a lot of hate goes towards us.”

Last year, her sister, Juliet came out as transgender at the Global Lyme Alliance’s inaugural gala in New York.

Although, I do not support or condone this whole transgender thing, Jackie’s sister, Juliet, has come out as transgender and the family has received a lot of hate over that too. They can’t win for losing… people should just leave them alone to lead their lives the best they can like everyone else. Meanwhile, Jackie will sing and will wow those in attendance. She has been a favorite of mine for years.

Leftists excel at hate and they despise Donald Trump and anyone connected to him. They are throwing sexual innuendos at Jackie as well, which is frankly, deplorable (and not in a good way). I think Evancho will be a massive hit at the Inauguration. I hope she knows that there is a lot of love out there for her and her gift.

Boris Epshteyn, Director of Communications for the Presidential Inaugural Committee, told the Independent Journal Review in a statement:

“We’re delighted to have Jackie Evancho performing the National Anthem at the 58th Presidential Inaugural Ceremony. As the youngest solo artist to ever go platinum, she is a true role model and inspiration for people young and old in our country and around the globe. Jackie represents the best and the brightest of America.”

I would watch the event just to see Jackie… she’s that good. 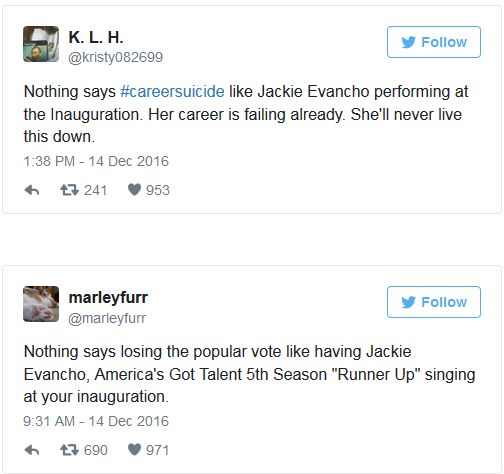 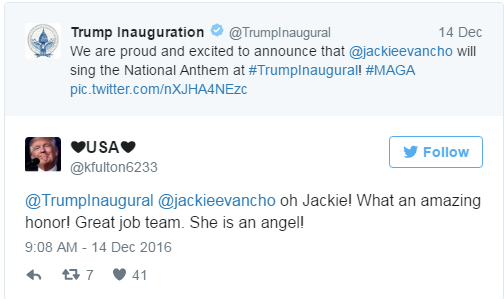