At last night’s Inaugural Gala[1], Donald Trump spoke to an enraptured audience. He gave the greatest nod to Kellyanne Conway, who he brought up for special recognition. This is a woman who is literally unafraid to go into the media lion’s den… and she always emerges victorious, leaving biased media enemies in tatters and bloody. It’s magnificent to watch. Kellyanne is the first female campaign manager to aid in the election of a President. She didn’t just break the glass ceiling, she shattered it.

Kellyanne Conway was stunning in a bright red off-the-shoulder gown last night. She was a literal flame of spirit and devotion to President Donald Trump (have to get used to typing that). She curtsied as gracefully as you can in a full length ball gown. Trump knows he owes this woman more than he can say and he adores her. She will be a close consultant throughout his presidency. 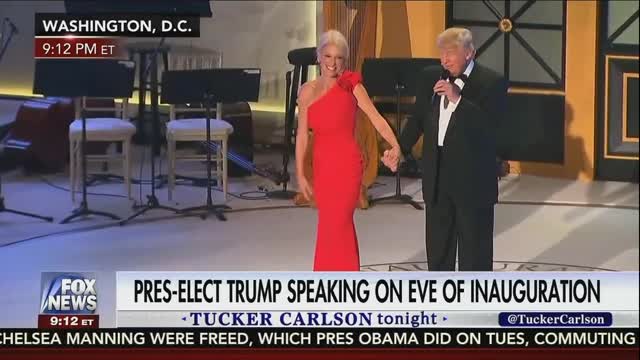 Now she’ll be a top aide to the GOP president for whom she played such a big part in getting elected.

Kellyanne Conway — who, in September of last year, became Donald Trump’s third campaign manager — was quoted in an October 2016 article in The New Yorker[3] regarding her shattering a big glass ceiling in presidential politics: “I tell people all the time, ‘Don’t be fooled, because I am a man by day.’”

And now, at an inaugural gala the night before his swearing in, President-elect Trump praised Conway for her fortitude — her willingness to go even where the men working for him are “petrified” to venture.

When President Trump moves into the White House with his pledge to “Make America Great Again,” Conway — who celebrates her 50th birthday on the same day that the 45th president takes the oath of office — will maintain her high-profile working relationship with Trump.

TheBlaze notes[4] that, with her title of “special counselor,” she will be the highest ranking female adviser in the Trump White House.

Conway will continue defending the President in an ever-more hostile media environment. CNN was actually positing what would happen if Trump was assassinated at his Inauguration. Just despicable. By the way, CNN was not granted a press pass to the DeploraBall. That’s a major slap. And more to come, I’m sure. It was Conway’s willingness to take that media heat — her steadfastness under fire — that Trump praised at a donors’ dinner Thursday night.

Trump praised Conway to the rafters: “There is no den she will not go into. When my men are petrified to go on a certain network I say, ‘Kellyanne will you go?’ Then she gets on and she just destroys them. So anyway, thank you, baby. Thank you. Thank you. Be careful.” After watching her in action, I would wholeheartedly agree. She’s a force to be reckoned with.