The President Just Got An AMAZING Gift From The Military – He Put It To Use IMMEDIATELY! [PICTURES] [VIDEO]

The military loves President Trump[1] and he hearts them right back. Upon arriving at the USS Gerald R. Ford, he was gifted with a beautiful jacket and a great hat. He decided to wear them right there on the spot as he addressed the crew of the nuclear-powered aircraft carrier Thursday. And I have to say, he looked fantastic. Echoes of JAG went through my mind.

President Trump praised the American sailors as the best in the world and their ship as a shining example of American craftsmanship. And it is impressive. The Navy Times reported that Trump used the speech to push for rebuilding and strengthening the military, which has been a focal point of his presidency. “I just spoke with Navy and industry leaders and have discussed my plan to undertake a major expansion of our entire Navy fleet, including having the 12-carrier Navy we need,” Trump told the crowd. And they were thrilled with the speech. I am too. 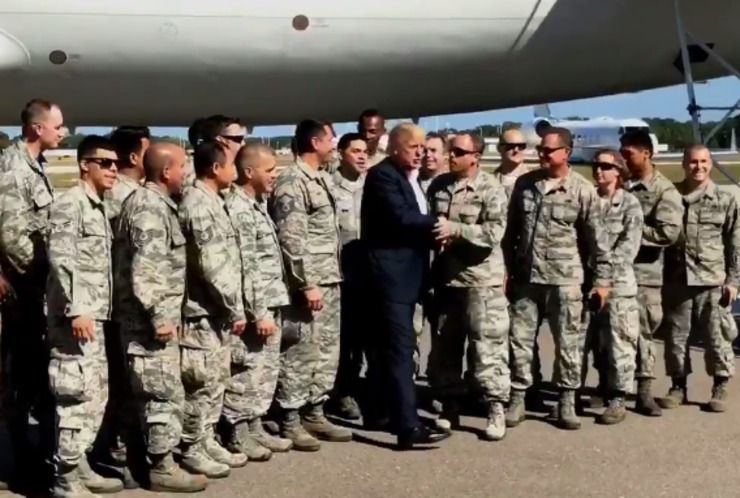 When President Donald Trump was presented with a flight jacket and a hat by the crew of the USS Gerald R. Ford, he didn’t just pack it away. He decided to wear it.

According to The Daily Caller[3], Trump was visiting the nuclear-powered aircraft carrier Thursday while it was docked in Newport News, Virginia. CNN[4] described the Gerald Ford as the Navy’s “newest, most sophisticated vessel” in service.

“They just gave me this beautiful jacket,” the president said as he began his speech. “They said, ‘Please take this home.’ I said, ‘Let me wear it. This is a special day. We’re wearing this.’ This is a great-looking hat.”

“American sailors are the best war-fighting sailors anywhere in the world, and it’s not even close,” Trump said. “The proud dignity of this ship is a fitting tribute to Gerald Ford. This is American craftsmanship at its biggest and its best.”

“American workers[5] are the greatest,” he added.

“After years of budget cuts that have impaired our defense, I am calling for one of the largest defense spending increases in history. And by eliminating the sequester and the uncertainty it creates, we will make it easier for the Navy to plan for the future.” The President went on to add: “This carrier and the new ships of the Ford Class will expand the ability of our nation to carry out vital missions on the oceans to project American power in distant lands. Hopefully, too, it is power we don’t have to use. But if we do, they’re in big, big trouble.” I love that! And our enemies were just put on notice.

General Mattis accompanied the President on his trip. President Trump left little doubt that he was there to support our military: “We will give the men and women of America’s armed services the resources you need to keep us safe,” Trump said. “This great aircraft carrier provides essential capabilities to keep us safe from terrorism.” Barack Obama did the exact opposite and I feared greatly for the safety of our nation. Now, we regroup and rebuild. It’s wonderful to have a president again that is in our warriors’ corner and America’s.