Toby Keith will be performing[1] at President-elect Donald Trump’s Inauguration and he’ll do it proudly and with no apologies. He has been harassed by leftists who want him to back out of performing and say he is sorry for even considering it. Keith is a man of conviction and principle. He let these asshats know that he won’t be bulled. He performed for both George W. Bush and Barack Obama… it wasn’t about the politics… it was about America and the military.

After 9/11, hearing Keith’s ‘Courtesy of the Red, White and Blue’ simply gave me the chills. A nation rallied and enthusiastically backed putting our boot up the enemy’s ass. There are those of us who still feel that way and I’m one of them. The song topped the country music chart and hit No. 25 on the Billboard Top 100 in 2002. Keith, a native Oklahoman, was named the Country Music Association’s male vocalist of the year in 2001 and won the music video of the year in 2012. He has recorded more than 20 No. 1 country music hits spanning his 20-plus-year career.

What the left is doing to this country with the pansification of Americans is beyond troubling, it’s treasonous. This is why I love Toby Keith, he’s his own man and no one is going to tell him what or what not to do. He simply does what he feels is right. That includes supporting the 45th President of the United States, Donald Trump. 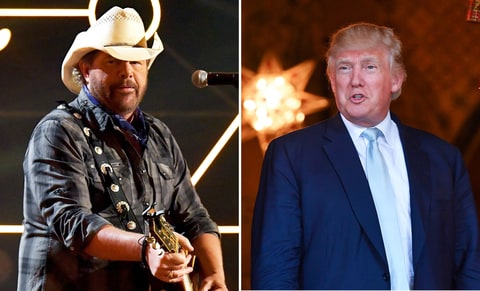 Country singer Toby Keith has no qualms about performing at President-elect Donald Trump’s inauguration celebration, and for any liberals looking for him to back down, they’ll have to look elsewhere because he said he has nothing to apologize for.

“I don’t apologize for performing for our country or military,” the songwriter said in a statement [3]to Entertainment Weekly. “I performed at events for previous presidents [George W.] Bush and [Barack] Obama and over 200 shows in Iraq and Afghanistan for the USO.”

The “Courtesy of the Red, White and Blue” singer was announced[4] as an inauguration performer, along with The Piano Guys, Lee Greenwood, 3 Doors Down and Jackie Evancho[5], who will perform the national anthem.

Keith, 55, is all about American patriotism[6], so this comment comes as no surprise — and no doubt a delight to Trump supporters who are sick of celebrities who bash Trump[7]. 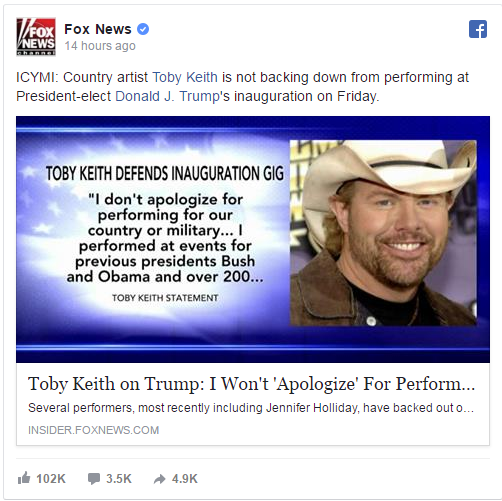 A number of performers have refused to appear at the Inauguration, either because they dislike Trump or peer pressure was just too much. A number of them have received death threats. Some that agreed to perform have pulled out because of those threats. This never happened when Obama went through his two Inaugurations, but the left has become so militant and entitled, they think they can get away with this crap. They are in for a rude wake-up call.

We are four days from the Inauguration and the door hitting Barack Obama in the ass as he finally leaves. America is thrilled and the common man is extremely excited over the big day. 200,000 Bikers for Trump are rumbling into DC and patriots and radicals are both congregating for the festivities. It will be like no other. It is supposed to be a peaceful transition of power, but this time, it could be a literal fight. The left is about to see what real Americans want and it isn’t Marxism.