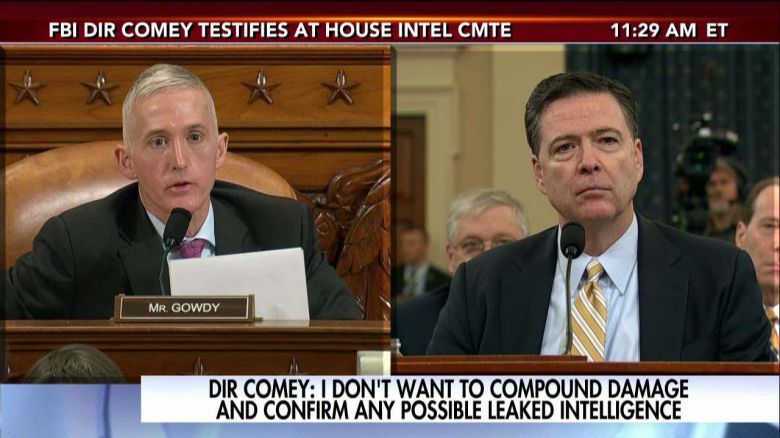 Gowdy picked at Comey concerning the leak that led to national security adviser Michael Flynn’s resignation, asking the director if an investigation of those leaks was close at hand.

The South Carolina representative acknowledged the possible risk of these intelligence leaks, saying that citizens empower the government with specific authority in exchange for protection and safety.

“We the American people give certain powers to government to keep us safe. When those powers are misused…I’ll bet you my fellow citizens are rethinking their side of the equation.”

Gowdy also tenaciously pushed Comey to reveal a listing of government officials who would have had access to the Flynn intelligence, naming a few officials to see if Comey would answer.

[email protected][3]: "We, the American people, give certain powers to government to keep us safe…" #ComeyHearing[4] pic.twitter.com/Ve6dFXpXRn[5]

He asked whether former Director of National Intelligence James Clapper, former CIA Director John Brennan, Obama Attorney General Loretta Lynch and ex-White House adviser Ben Rhodes would have had any knowledge of evidence that Flynn was caught on tape consulting with the Russian ambassador.

Comey recognized all but Rhodes were informed about what was there, the revealing of which is a felony punishable by up to 10 years in prison. He also wanted to make it clear that the FBI would take the disclosure “very seriously.”

Before the hearing, Comey said the Justice Department had commissioned him to substantiate the ongoing investigation and claims of “coordination” between President Donald Trump’s campaign and Russia.

Comey also went as far as to claim that he had “no information” to support President Trump’s claims that former President Barack Obama organized surveillance of Trump Tower during the election campaign.