There is no one like Trey Gowdy.[1] He cuts right through all the bull crap. He was asked by Fox’s Martha MacCallum about the Donald Trump Jr. Russian meeting last summer. And he was blunt… he has three areas of concern. The first is legal, but Robert Mueller will be the one overseeing that investigation. I’m not thrilled that Mueller is there, but it is what it is and he will get to the bottom of the legality of the whole thing. I will say this though… I agree with Alan Dershowitz… there was nothing illegal about the meeting. And there was nothing that rose to the level of treason. Sorry liberals. That dog don’t hunt.

Gowdy is also concerned on the political level as this whole Russian business is derailing anything that President Trump and the Republicans want to get done. It’s all the media and left focus on and it is now actively inhibiting progress on life and death political matters. But it’s the third level I find really interesting and that I agree with wholeheartedly. It bears repeating: “Someone close to the president needs to get everyone connected with that campaign in a room and say from the time you saw Doctor Zhivago until the moment you drank vodka with a guy named Boris,” he exclaimed, “you list every single one of those and we’re gonna turn them over to the special counsel. Because this drip drip drip is undermining the credibility of this administration,” he concluded. Exactly right… people better lay it all out and do it right now before an anvil made in Moscow drops on Trump at some point. 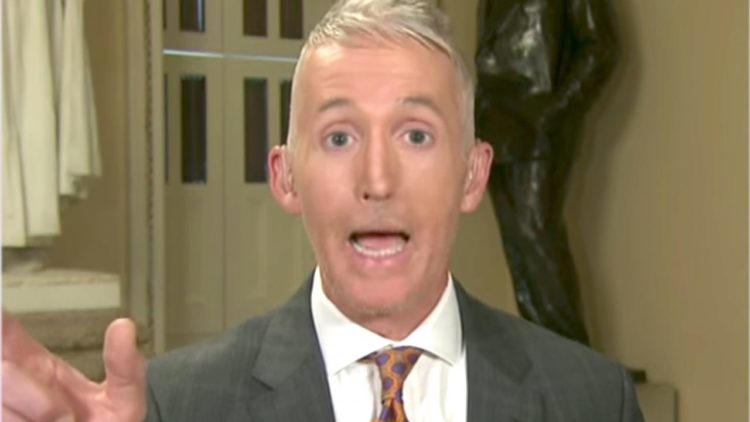 Rep. Trey Gowdy (R-S.C.), speaking Martha MacCallum on Fox News Tuesday, said that he was disturbed by the details in the emails disclosed by Donald Trump Jr., and not so much about what actually happened at the meeting.

“So in terms of this Donald Trump Jr. story that’s out there today, are you troubled by any of it,” asked MacCallum.

“Yeah, I’m troubled on three levels,” Gowdy replied. “Number one, the legal level, but I think that’s Bob Mueller’s lane. The political level, Martha, here we are beginning another week, this one in July with a new revelation about Russia.”

“And the third, which is more of a medical issue,” he joked, “is the amnesia of the people that are in the Trump orbit.”

I’m also with Gowdy on the fact that I’m less concerned with this Russian attorney wanting to wheel and deal on sanctions and Russian adoption, than I am on the original pretense of the meeting. Digging up dirt on Hillary Clinton. Normally, getting info like that from a source is no big deal… unless it is a hostile foreign government. In which case, it’s a HUGE deal. Now, as far as we know, there was no info exchanged. But the very fact that the meeting took place opens the campaign up to possible blackmail and control from Russia. It was a dumb thing to do. Russia was stating they wanted to influence an election in the US. You don’t invite that vampire in. Ever.

The words that concerned Gowdy the most were: “Russian governments’ efforts to help the Trump campaign, official documents.” It also doesn’t look good that it took Donald Trump Jr. a year to disclose this meeting and he only did so because the New York Times was about to beat him to the punch. Like Gowdy, I’m troubled on a number of levels over this. But it’s ethical, not legal and it is not a smoking gun.