Donald Trump has now been officially endorsed by the NRA.[1] An endorsement I feel they will come to regret, but that’s neither here nor there on this subject. Trump had extremely harsh words for Hillary Clinton on her dictatorial gun control stance and he’s right on that issue. In his speech, Trump hammered home the ‘Crooked Hillary’ meme. He spoke of her issuing anti-gun executive orders and disarming vulnerable citizens in high crime neighborhoods. He reiterated his desire to eliminate gun-free zones in schools and on military bases on his first day in office. Nice speech, lofty goals, soothing words to the NRA… but as recently as 2000, Trump stood the exact opposite of his stance on guns now. 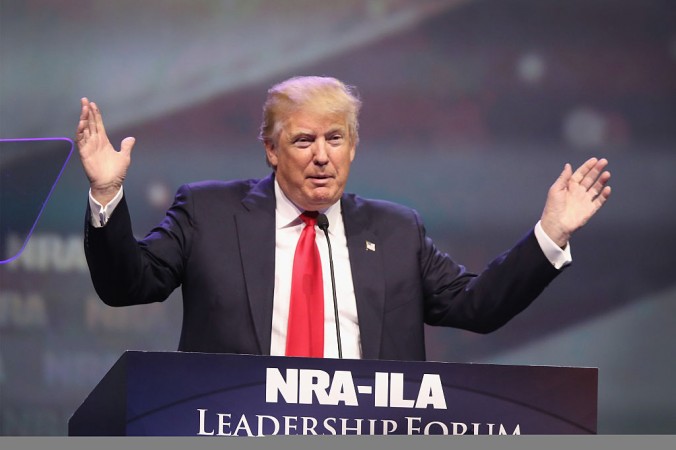 Hours before speaking to the National Rifle Association at their national convention in Louisville, Kentucky, on May 20, Donald Trump fired off a tweet attacking rival Hillary Clinton for her stance on gun control.

The tweet contains a video of Hillary Clinton saying, “Here again, the Supreme Court is wrong on the Second Amendment, and I am going to make that case every chance I get.”

Trump is not a conservative and he is not a constitutionalist. These people are playing Russian Roulette with the presidency and it will not play out the way they envision. I believe that Trump wants the presidency for the wealth, influence and power it brings. Not to restore our freedoms. Trump has recently called gun bans “a total failure,” opposed an expansion of background checks and called for concealed carry permits to be valid across all 50 states. Everyone hopes that is true and that he keeps his promises. But with a man who is a pathological liar, how can you believe anything he says? The Republicans have become so desperate that they have thrown caution to the wind and have thrown their support behind a conman liberal. Does anyone really see this ending well? The NRA is now kneeling before the Trumpster. I hope he doesn’t club them in the end.