President Trump nailed Mayor Sadiq Khan[1], the first Muslim mayor of London, today for making astoundingly dumb statements. After multiple coordinated terror attacks on London last night that left seven citizens dead, three terrorists dead, 48 injured (21 critically) and at least 12 suspects arrested, Khan had the nerve to tell Londoners to not be alarmed as they see more armed and unarmed police on the streets. Seriously? Exactly when should people get alarmed? As their throats are being slashed? No reason to be alarmed my ass.

Khan was elected last year and has made numerous outrageous comments since then regarding terrorism. After last night, he claimed that London was one of the safest cities in the world. Really? Because it sure doesn’t look that way. They’ve had three major terror attacks in the last three months there. I don’t call it safe when Jihad by vehicle is the norm. Nor does one feel safe when terrorists are blowing people up, going on a knife intifada or are shooting innocent bystanders. I don’t think Khan understands what ‘safe’ means. He’s also said that we have to get used to terrorism as a part of life in big cities. Bull crap. 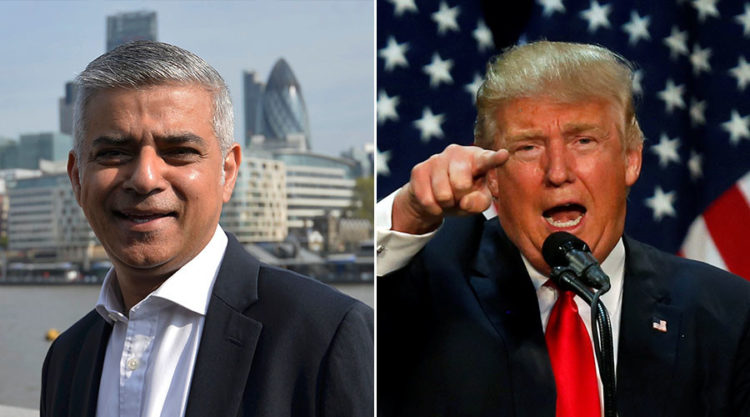 President Trump tore into London’s left-wing Mayor Sadiq Khan Sunday in the wake of a terror attack in London that left at least seven dead and dozens injured — after Khan told Londoners there is “no reason to be alarmed.”

Terrorists drove a van through crowds near London Bridge Saturday night, before rampaging through a nearby market and stabbing people, before they were eventually being shot by armed police. Their identities have not yet been revealed by authorities.

Khan, who became London’s first Muslim mayor last year and has become known for making bizarre remarks about terrorism, told Londoners that there was nothing to be alarmed about as the city ramps up its police presence in the wake of the attack.

“Londoners should be aware that there will be additional armed and unarmed police officers on our streets from tonight in order to keep Londoners, and all those visiting out city safe,” he said.

“I want to reassure all Londoners, and all our visitors, not to be alarmed. Our city remains one of the safest in the world,” he said[3].

This cat is just bizarre. He complimented police and first responders and totally ignored the wounded and dying in the street when this first happened last night. Khan has become well-known in America for his politically correct statements about terrorism. In May of last year, he called Trump’s views on Muslims “ignorant.” Because terrorism is so ‘enlightened’ y’all. “London has proved him wrong,” Khan said. Uh no… it has proven that you are a liar and a terrorist sympathizer.

Khan refused to raise the threat level. Just ignore the blood and bodies in the street. He calls the terrorists cowards… how do you get that? They are dying for what they believe in. They are murdering fanatics, but they aren’t cowards. A spokesman for Khan said today that Khan “has more important things to do than respond to Donald Trump’s ill-informed tweet that deliberately takes out of context his remarks urging Londoners not to be alarmed when they saw more police — including armed officers — on the streets.” Trump isn’t the ill-informed idiot here and Khan’s remarks were not taken out of context. London chose poorly when they elected this guy… I suggest they rectify that asap.

We are all shocked and angry today – but this is our city. We will never let these cowards win and we will never be cowed by terrorism. pic.twitter.com/kcosumkdCR[4]

We must stop being politically correct and get down to the business of security for our people. If we don't get smart it will only get worse

At least 7 dead and 48 wounded in terror attack and Mayor of London says there is "no reason to be alarmed!"

Trump's ignorant view of Islam could make both our countries less safe. It risks alienating mainstream Muslims. London has proved him wrong

You have to be kidding me?!: Terror attacks are part of living in big city, says London Mayor Sadiq Khan https://t.co/uSm2pwRTjO[9]