While Trump Calls For Peace Among Americans, Look What Protesters Were Doing

As much as he disliked, disagreed and fought against Trump, former President Obama was cordial today at the swearing-in of President Donald Trump. Maybe his supporters should take a leaf and stop trying to cause trouble where there isn’t any.

A small group of protesters made their way to the front of the pack as Trump was taking the Oath of Officer and began chanting, their shirts together spelling “resist.” I’m not sure what they’re resisting, other than the temptation to be a good, decent human being. 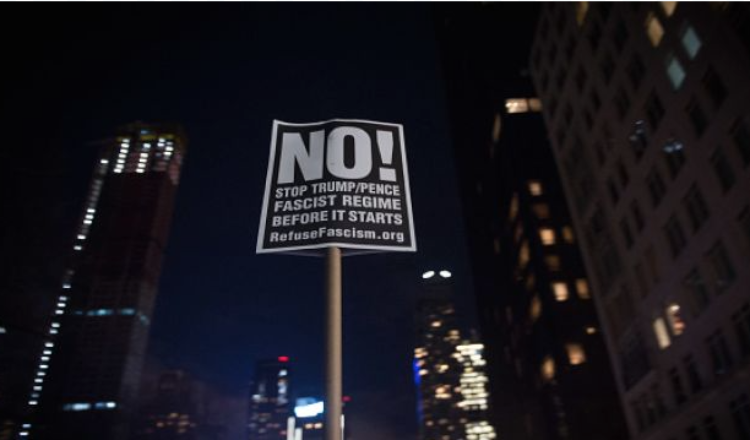 So much for the peaceful transition of power. Protesters and rioters have been wreaking havoc on Washington D.C. all day, with some getting way too close to the new President[2].

Six protesters who found their way very close to the stage stood up, raised their fists and began shouting “We the people,” as Donald Trump took the oath of office. Their shirts together spelled “R-E-S-I-S-T.”

As they were removed by authorities, they shouted “USA! USA!”.

As she was led away, a female protester said, “We’re for an America for all of us.”

Officers have been injured and property destroyed by rioters who are afraid that the Trump Presidency is going to be violent. I guess they figured they’d get a jump on that by smashing the windows out of Starbucks, an uber-liberal coffee company that supports Democrats.

Apparently neither is caring for the elderly. Violent thugs pretending to be protesters knocked down an old man and sent him to the hospital with a head laceration.

An elderly man was knocked over during violent protest on 13th and I. Loaded into ambulance, bleeding from the back of his head pic.twitter.com/M2DiFHz4Xq[3]

Aren’t you so big and strong, making a political difference by assaulting old men because you’re mad at the President?

These thugs need to be stopped and I hope the police can get this craziness under control before anyone else gets hurt.