United States President, Donald Trump, decided to spend his Monday with the true heroes of our country. Donald Trump spent his day in Florida having lunch with some of the troops. He carried on a conversation with them and asked them about their lives. He even brought up the Super Bowl, asking them how they felt about the amazing game. But then careers came into the conversation and Donald Trump had some advice for a young man.[2]

Donald Trump turned to one of the service members during lunch and asked the young man if he intended to “make a career” out of his military service.

“Still deciding right now, sir,” the soldier answered back to the president.

Trump did not hesitate before assuring the young man that the military was the best place. Saying, “Come on, you have to stay. You’ll like it better with me there. You’ll see.”

“I want every military family to know that our administration is at your service. We stand with you 100 percent,” Trump said. “We will never, ever let you down.”

In a world very much at war, the importance of this message was not lost on the military women and men or us. We have a president ready to stand behind the military and support them in every way he can. It is about time for that kind of commitment. 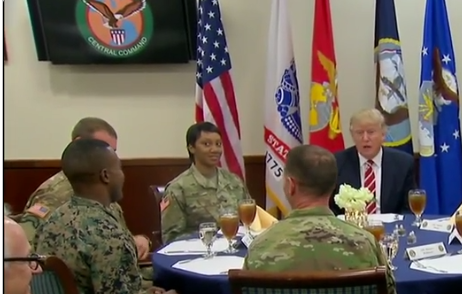