TRUMP Under Fire – Courts Unleash SHOCKING Charges Against Him…

I’m no Trump fan[1], but I don’t much buy this allegation against him. Trump is being named in a lawsuit with Jeffrey Epstein, another billionaire, who was convicted of soliciting an underage prostitute in 2008. Media rags out there are claiming that Trump raped a child or some such nonsense. The woman’s name is Katie Johnson. Trump and Epstein are allegedly being accused of “sexual abuse under threat of harm” and “conspiracy to deprive civil rights” while she was underage. The woman is representing herself which makes you go, hmmm. She’s seeking $100 million and her name is not found in Epstein’s little black book for pedophiles. Color me highly skeptical here. 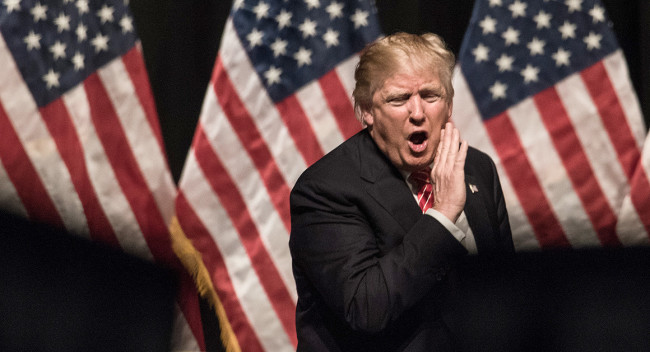 How desperate is the mainstream media to derail Donald Trump’s campaign? Now they’re even resorting to covering a sick, frivolous lawsuit that makes the claim Trump raped a teenage girl.

According to Radar Online[3], Trump was named in a lawsuit with Jeffrey Epstein, a billionaire who was convicted of soliciting an underage prostitute in 2008. The woman, named as Katie Johnson, alleged that Trump and Epstein committed “sexual abuse under threat of harm” and “conspiracy to deprive civil rights” while she was underage.

Johnson was acting as her own lawyer, which doesn’t add to the respectability of the lawsuit, for which she is seeking $100 million. It’s also worth mentioning that Radar Online[4] also reported that “Katie Johnson” doesn’t appear in Epstein’s meticulously kept “black book” of prostitutes.

It’s almost as ridiculous as Trump accusing Cruz of being a liar and getting on Fox News and Friends this morning and accusing Cruz’s dad, Rafael Cruz, of being involved in the JFK assassination[5]. Cruz should sue Trump and the National Enquirer over that piece of slander. That’s one of the most disgusting lies I have ever heard. Rafael Cruz hates Fidel Castro and fled Cuba for his life. There are sooo many reasons Trump should not be the nominee, but this lawsuit by Katie Johnson isn’t one of them. Bill Clinton is much more likely to have partaken of Epstein’s offerings than Trump. The lawsuit read like something out of a bad movie: The plaintiff claimed “she was enticed by promises of money and a modeling career to attend a series of underage sex parties held at the New York City residence” of Epstein “and attended by” Donald Trump. The charges are graphic: “On the first occasion,” Johnson said she “was forced to manually stimulate Defendant Trump with the use of her hand … until he reached sexual orgasm. On the second occasion,” the client “was forced to orally copulate Defendant Trump by placing her mouth upon Defendant Trump’s erect penis until he reached sexual orgasm. On the third occasion,” she claims, she “was forced to engage in an unnatural lesbian sex act,” with a 12 year-old “sex slave.” Let’s just say that I don’t believe them. As vile as Trump is, this isn’t him and just doesn’t ring true.