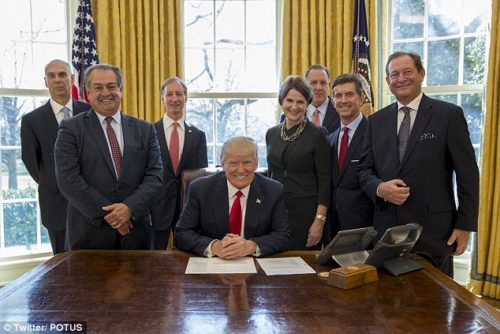 In an unprecedented move[2] aimed at scaling back America’s bloated bureaucracy and burdensome regulations, President Trump has signed an Executive Order creating and mandating regulatory reform task forces and individuals. These groups will be responsible for identifying and recommending for elimination, rules deemed to hinder American progress and the economy. Other administrations have made attempts at scaling back and made some progress, but this is a concerted agency-wide effort sure to bring dramatic results.

Every Federal agency must establish a task force and report on the progress in 90 days. It’s a new day and we have a new President who is doing exactly as he promised. He is breaking the chains of government which have been strangling American business and private American citizens for far too long.

Before he signed the order, President Trump said “Excessive regulation is killing jobs, driving companies out of our country like never before. Every regulation should have to pass a simple test; does it make life better or safer for American workers or consumers?”

Keep doing just what you said, President Trump. We are with you!