TRUMP: Hillary’s Being Nice To Obama Because She Wants To Stay Out Of LOCKUP! (VIDEO)

Hillary,Hillary, Hillary. You will never learn that folks can see right through you and your stupid lies, will you?
If you think you are tricking one Donald J. Trump, you are sadly mistaken:[1] 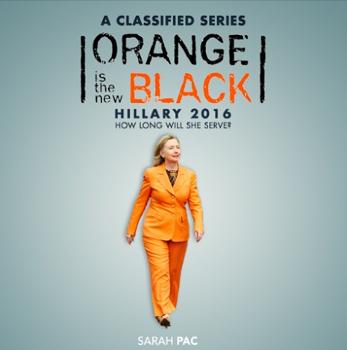 Earlier today, at a rally in Tulsa, Oklahoma with Sarah Palin, Donald Trump told the crowd Hillary Clinton is being nice to Obama because she wants to stay out of the clink.

Tonight Trump doubled-down on the remarks.

Greta Van Susteren: From the soundbite we played you suggested Secretary of State Hillary Clinton is saying positive things about President Obama because she wants to stay out of the clink. Do you want to elaborate on that?

Donald Trump: Look, she has done things that are absolutely wrong and absolutely illegal no matter how you look at it… And when you look at what she’s done compared to General Petraeus it’s 20 times greater. It’s not even a contest. General Petraeus has suffered greatly and you know the consequences. What he’s gone through is brutal. And she’s gone through nothing. And, I say it’s up to the president. It’s up to the Democrats. What the Democrats are doing is preserving her to run for office. Anybody else who did what she did would now be sitting in the clinker.

She certainly has another think coming, doesn’t she, folks? Do you think Hillary deserves JAIL TIME? Sound off in the comments below!