Trump Is Asked If He Has A Message For Mexico – He Did, Responds With THIS! [VIDEO]

Bill O’Reilly asked Donald Trump[1] if he had a message to Mexico about the wall he claims he will build if elected president. He doubled down and vowed that Mexico would indeed pay for the wall, despite the fact that Mexico has been very clear that they will not. In that case, Trump would do one of several things: he would impose tariffs… high taxation on goods coming into the US or going to Mexico. Both of which we would wind up taking the hit for in consumer pricing. Or, he says he would unconstitutionally seize payments sent to Mexico. Does anyone even begin to think that is a good idea? Finally, he talks about reducing the trade deficit, which is some vague idea of erasing debts to somehow force payment from the Mexicans. Again, without Congress or even with Congress, that is unethical in the extreme. 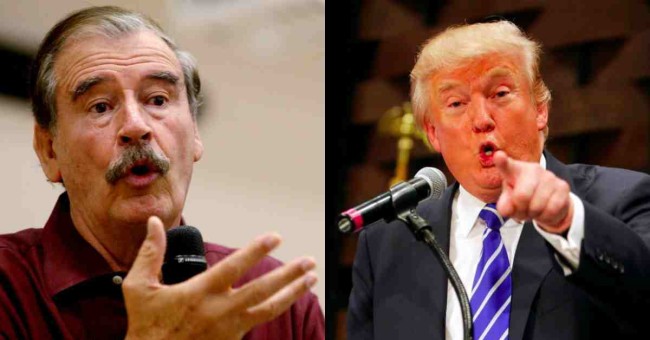 Building a border wall[3] and stemming the tide of illegal immigration are perhaps the biggest components of the success seen thus far by the presidential campaign of billionaire businessman Donald Trump.

Trump promised not only to build a wall along the U.S. border with Mexico, but has vowed to make Mexico pay for it as well, earning rebukes from some, particularly former Mexican President Vicente Fox[4], who infamously quipped, “I’m not paying for that f***ing wall.”

During a recent appearance on Fox News with host Bill O’Reilly, Trump was asked if he had a message he wanted to deliver to the former Mexican leader.

Trump stated that he “would threaten to change a rule under the USA Patriot Act anti-terrorism law to cut off a portion of the funds sent to Mexico through money transfers, commonly known as remittances. The threat would be withdrawn if Mexico made ‘a one-time payment of $5-10 billion’ to pay for the border wall.” That’s extortion. Trump also suggested visa cancellations and increased border crossing fees. That’s a tyrant mindset. That’s not how America works. We are a nation of laws and we should just remove all the incentives. Enforce the law. Trump will not build the wall he promised. I’m certain of that. But if he did and funded it this way, those are the actions of a dictator… a strongman. America, is this really what you had in mind? The fact is, the wall was already approved by Congress and the funds allocated. Why are we doing this dance? More reality TV… more mobs lining up with pitchforks to get em! He’s playing on America’s anger. The welfare funds alone granted in incentives would pay for the damned wall. Just cut off the incentives.