Donald Trump Jr.[1] is not holding back over Kathy Griffin and he shouldn’t. He believes she “deserves everything that’s coming to her” after doing a photo shoot utilizing an effigy of President Trump’s decapitated, bloody head. Afterwards, she had the nerve to claim she was the victim of bullying by the Trump family. Just ridiculous. The family was very measured and calm in their response to her. Frankly, I would not have blamed them for letting her have it with both barrels, both personally and legally. But to their credit, they didn’t do that.

The Trump family here acted appropriately. It was Kathy Griffin who was way over the line here along with her bottom-feeding civil rights attorney. Griffin claimed last week that Donald Trump had ‘broken her’. She did that to herself… now all her appearances are cancelled, she’s been fired from CNN and no one wants to go near her. She owns that lock, stock and barrel. Her career ended the minute she pulled this vile stunt, reminiscent of an ISIS beheading and nothing less than sheer incitement to violence against a sitting President. 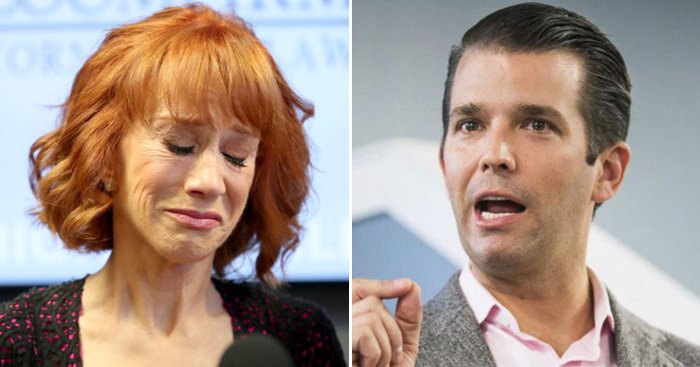 Donald Trump Jr. believes that Kathy Griffin “deserves everything that’s coming to her” after she released a photo of her holding the bloody, decapitated head of the president and then tried to claim that she was the victim of bullying.

“I don’t think we’ve been so measured,” Trump’s son said during an interview on ABC News, pointing to his family’s response[4] to the image. “I don’t think we did anything inappropriate … but then to run and claim victimhood? She deserves everything that’s coming to her.”

Griffin hosted a press conference last week claiming that the Trump’s had broken her, after her stunt.

“I don’t think I will have a career after this. I’m going to be honest, he broke me,” Griffin said tearfully,[5] calling the Trump family bullies.

Griffin complained she was the victim of “a mob mentality pile-on” after multiple scheduled appearances of her comedy show were canceled.

Not a soul believed Griffin’s faux apology. Little Barron Trump was traumatized over this and that may have been one of her goals all along, as last December she declared she was going after Barron. She has a thing for attacking children. Just ask Sarah Palin. Michelle Malkin called Griffin a ‘soulless troll’ and I could not agree more.

Griffin’s erratic behavior at her presser was widely panned; USA Today said[6] it was a “D-list” showing and Salon called[7] it “mad” and “looping.” It was all of that. Griffin was simply unhinged. She went from crying to cracking tasteless jokes. She made no sense… Melania is right… there’s something wrong mentally with this woman.

Trump, Jr. said his family’s reaction to the controversy was appropriate and I agree. “Naturally, I was pretty disgusted,” he said.” “Everyone who’s watching right now saw what happened. They saw my father’s response. They saw the First Lady’s response about her son and how it affected him. They saw my response. I don’t think we’ve ever been so measured, perhaps, on a relative basis.” What Griffin did was inexcusable and whatever she gets now, Donald Trump Jr. is right… she’s richly earned it.

The photo says it all, but this is what the left thinks is acceptable today. This is the double… https://t.co/ZzNT85I2uC[8]

The only thing #KathyGriffin[10] is a victim of is her own ignorance. 24 hours from fake apology to victim status is impressive by any standard!

Amazing read. It's really hard to play victim when you decide it's ok to attack #POTUS[12] & HIS CHILD in a premeditated fashion. #KathyGriffin[10] https://t.co/uELhdE9OSI[13]