Trump Jr. Trolls Clinton Over Her Silence On Weinstein – Then Rob Schneider Joins And GAME OVER!

Hillary Clinton has no one to blame over this whole Weinstein mess but herself. She still hasn’t given back funds he has donated to her over the years, therefore game on. She also hasn’t denounced the pig. The media is just as bad. They’ve actively ignored the case and Saturday Night Live admitted to deliberately passing over the story because Weinstein is from New York. Funny, so is President Trump and that’s never stopped them from showcasing him. Even late night comedians haven’t taken pot shots at Weinstein for sexually harassing a long list of women over decades in Hollywood. If this were a conservative or a Republican, it would be an entirely different scenario.

Weinstein is a big fan of Hillary Clinton. Not only did he make hefty campaign donations to her, he threw lavish fundraisers, some at $32,000 a plate, and raked in millions of dollars for the Hildabeast. He connected Hillary to his Hollywood pals, who threw more money at her. And let’s not forget that Weinstein donated $250,000 to the Clinton Foundation. A number of other Democrats who received money from Weinstein are donating those funds to charity, but not Clinton. 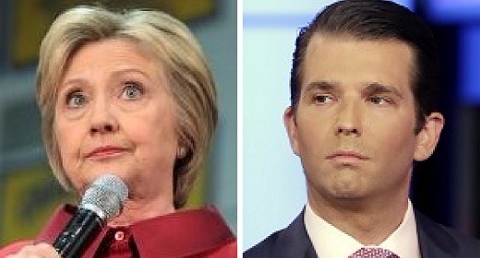 The Democratic National Committee received hundreds of thousands from Weinstein. Surprise, surprise… they say they will only donate a small portion of that to Democratically-aligned charities. But Hillary Clinton’s silence on funds that came her way from Weinstein is the loudest of all. As the rest of Hollywood and politicians distance themselves from a sexual deviant, Clinton condones his actions with her silence. Isn’t that typical for Hillary Clinton? Look at who she’s married to.

Hillary Clinton complained about standing too close to President Trump during the debates. Seems to me that Weinstein did a lot more than stand close to women. She also says all victims are to be believed. How about the Fox News reporter that was cornered by Weinstein as he pleasured himself? Does she deserve to be believed, or is that really only for liberals? And it certainly doesn’t apply to all the women who came forward against Bill Clinton, does it?

Hillary Clinton has been awfully silent about Harvey Weinstein, especially since he donated $250,000 to the Clinton Foundation. #RapeCulture[2]

Donald Trump Jr. wasn’t having any of it and let Clinton know it on Twitter. He gave her a little nudge: “Weird, Hillary has been really quiet about Harvey Weinstein. You would think she would be all Over this. #WhatHappened?” And he wasn’t alone. What Trump Jr. started, conservative actor Rob Schneider finished: “Whoever kidnapped @HillaryClinton the last 48 hours so she couldn’t talk to the press PLEASE LET HER GO!” Perhaps we need a new game called ‘Where Is Hillary?’ See, there’s at least one comedian who knows a golden opportunity or opportunist when he sees it.

Even Meryl Streep disavowed Weinstein. But crickets from Hillary Clinton. Wonder when she will disavow this perv? Of course, she has lying by omission down to an art form, so maybe condoning with silence is her next attribute to perfect. Here’s a quote for you Hillary: “Silence in the face of evil is itself evil: God will not hold us guiltless. Not to speak is to speak. Not to act is to act.” – Dietrich Bonhoeffer.

I met Harvey Weinstein at a Hillary Clinton birthday bash. It was not pleasant.

Weird, Hillary has been really quiet about Harvey Weinstein. You would think she would be all Over this. #WhatHappened[6]?