That’s funny and very, very clever![1] President Trump greeted his first official tour group to the White House today. A group of fifth graders from Alabama. The children went wild when they saw him, taking selfies and pics. Trump was all smiles too. But it’s where this took place that is awesome. Right smack dab in front of the official portrait of Hillary Clinton. He trolled her. Heh.

The media caught it and covered it. Even they were amused. You know that was scripted and intentional. Trump looked like he was having the time of his life and I’ve never seen a bunch of kids as excited as this group was. It looks like a lot of fun. Nice impromptu photo-op. Hope the little boy that Trump hugged gets a copy. It’s historic and classic. 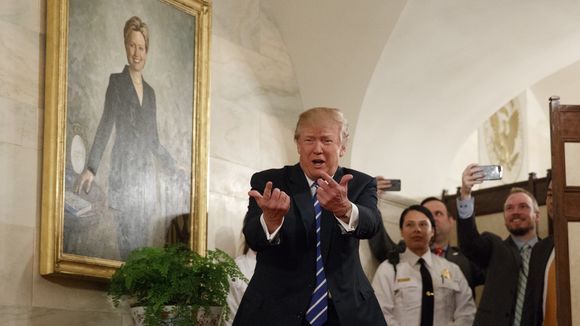 POTUS gave the tour group — a 5th grade class from Alabama — an impromptu photo-op, which CNN’s Poppy Harlow and John Berman noticed occurred directly in front of a certain portrait of a certain, former First Lady-turned-Senator-turned-Secretary of State.

After playing footage of the encounter, Harlow pointed out the “woman in the portrait right there over the President’s right shoulder.”

“None other than his, well, foe in the election,” she continued. “Former Secretary of State Hillary Clinton.”

Per Tuesday pool reports[3], a group of nearly 100 people were gathered off the East Room when the President appeared. The tour group, many of whom were fifth grade students from Briarwood Chistian School in Birmingham, AL, cheered. Trump then gestured for someone to come forward, resulting in a hug with 10 year-old Jack Cornish. Who, I guarantee, will never ever forget this day as long as he lives.

“Work hard, everybody, work hard,” Trump told the group. What a great way to address visitors. “I am excited to reopen the White House to the hundreds of thousands of visitors who come each year,” first lady Melania Trump said in a statement. “The White House is a remarkable and historic site and we are excited to share its beauty and history. I am committed to the restoration and preservation of our Nation’s most recognizable landmark.” And why not have fun with it while doing it? Too funny.