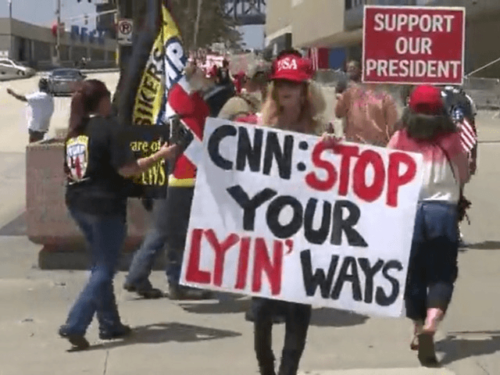 Some Americans who support our President are fighting[2] back against Leftism and fake news. Recently, there was a large protest organized outside the CNN headquarters in Atlanta. Their goal? To call out CNN and other media outlets for their constant stream of fake news designed to tear down President Trump. Main Street Patriots has had enough and they let CNN know it.

The co-founder of the Patriots, Debbie Dooley, said that the country needs to see that Trump supporters are “just as motivated and passionate” about the President as those who so viciously oppose him.

But she qualified that statement saying, “Except that we are peaceful and law-abiding citizens.”

Chris Cox, founder of BFT 2020 accused CNN and other outlets of “journalistic malpractice on a daily basis.”

If the shoe fits.

A woman who immigrated here legally from El Salvador at age 9 remarked, “As an immigrant to this country I hate that they’re ripping our Constitution by the way they are treating our president. This is an awesome country. We are a beacon of light and freedom to the rest of the world.”

One man attending the protest opined that “They’re spreading fake news across the country, and we’re seeing the results of it.”

CNN fills the airwaves with lies and slander about our President on a daily basis. There are consequences for that. America, let’s be discerning about our news sources. Many of them are simply lying to us. Many of them cannot be trusted. Many of them are hoping there’s still some way to install Queen Hillary in the White House. These folks can’t be reasoned with, nor should their “reporting” be taken seriously.

No word on whether CNN responded to the rally outside their headquarters. We’ll hold our breath. 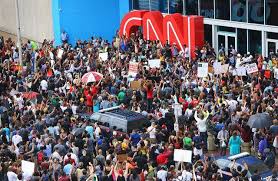