Trump PROVES He Is NO Obama With His DEAD HONEST Fidel Castro Statement!

Trump’s statement on the passing of the commie butcher, Fidel Castro[1], is simply perfect. Obama’s is the exact opposite. Whereas Trump called Castro the brutal dictator he was, Obama mourned his passing. Figures. Trump accurately pointed out that Castro’s legacy is oppression and death. Trump won overwhelming support from Cuban-Americans during the 2016 election for his opposition to Obama’s normalization of relations with the Castro regime. And President Trump gets major respect from me today… he stated flatly: “The people of Cuba have struggled too long. Will reverse Obama’s Executive Orders and concessions towards Cuba until freedoms are restored.” He’s going to undo Obama’s Executive Orders on Cuba. Slow clap. Respect.

Compare Trump’s strong, presidential response with Obama’s weaselly one: “At this time of Fidel Castro’s passing, we extend a hand of friendship to the Cuban people. We know that this moment fills Cubans – in Cuba and in the United States – with powerful emotions, recalling the countless ways in which Fidel Castro altered the course of individual lives, families, and of the Cuban nation,” Obama said in a statement put out by the White House. “History will record and judge the enormous impact of this singular figure on the people and world around him,” Obama said. He got one thing right, history will indeed record the actions of a murderous dictator like Castro. Fidel Castro is at long last dead and in hell where he belongs. 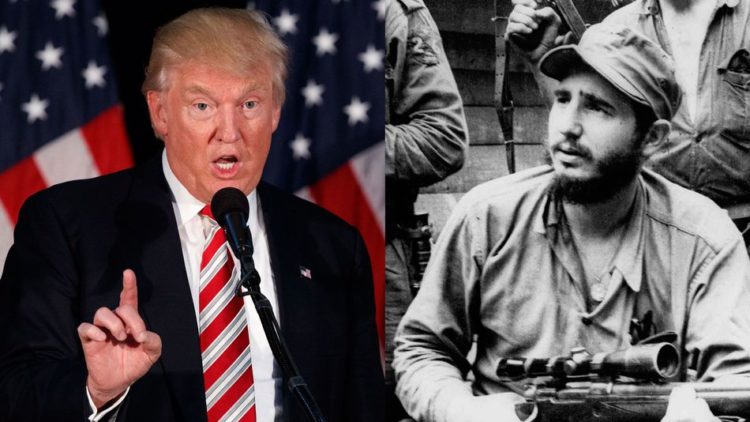 “Today, the world marks the passing of a brutal dictator who oppressed his own people for nearly six decades,” Trump said in a statement released on the news of Castro’s death Saturday.

“While Cuba remains a totalitarian island, it is my hope that today marks a move away from the horrors endured for too long, and toward a future in which the wonderful Cuban people finally live in the freedom they so richly deserve,” Trump said.

“Though the tragedies, deaths and pain caused by Fidel Castro cannot be erased, our administration will do all it can to ensure the Cuban people can finally begin their journey toward prosperity and liberty,” Trump said. “I join the many Cuban Americans who supported me so greatly in the presidential campaign, including the Brigade 2506 Veterans Association that endorsed me, with the hope of one day soon seeing a free Cuba.”

Fidel Castro tortured and murdered tens of thousands of Cubans. But no one seems to know his history and celebrities seem in love with his bad boy commieness. Now, they’ll have to settle for his brother, Raul. Castro passed away at the age of 90, after years of being in poor health. He came to power in 1959 as part of a communist revolution and only stepped aside in 2006. Castro’s brother Raul now runs things in Cuba. He’s no better than his murderous brother by the way.

If you want to read some really ridiculous tributes, go here[3]. Castro was a KGB agent of influence. He had solid ties with the Russians that span decades. Birds of a feather and all that.

President-elect Trump in one tweet just proved he is no Obama and thank God for that. That was a presidential response I can celebrate. It’s fitting that Fidel Castro passed away on the most capitalistic day of the year – Black Friday. Timing is everything. 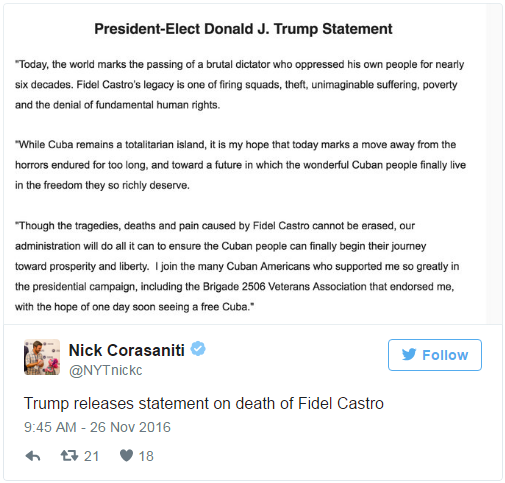