Venezuela has morphed[1] into a full-fledged brutal communist dictatorship and President Trump is fed up with it. I don’t blame him in the least. Communist regimes like Venezuela have killed millions… it is a scourge that needs to be eliminated. Yesterday, Trump threatened military action if Maduro didn’t knock if off and stop brutalizing his people. Maduro called Trump who would not take his call. Nor should he… why listen to a lying communist dictator? It never goes anywhere good.

The Venezuelan people[2] are starving to death. They have been thrown into horrid poverty and violence by Maduro. And it’s not just the overwhelming humanitarian crisis occurring… Venezuela is one of the largest suppliers of oil[3] to the world. Should that fall apart, it will impact everyone[4] negatively, including us. Maduro has seized control of everything in the country… including the media. There are soldiers loyal to the regime placed everywhere, including churches and stores. They brutally enforce the will of Maduro. People are being butchered and tortured. Rape is common and the people are being savaged by their own government and military.

If this does not resolve[5], at some point we will have to step in militarily to stop this. Many Americans will not like that… but think of it this way… If you had a psychotic murdering monster next door, would you tell him that just as long as he killed his own and stayed away from you, you are cool with that? Or would you stop him? That’s what is going on here. The Venezuelan people have been calling out to Trump, begging for his help. Maduro must be removed from leadership in that country in order for them to start recovering as a nation. 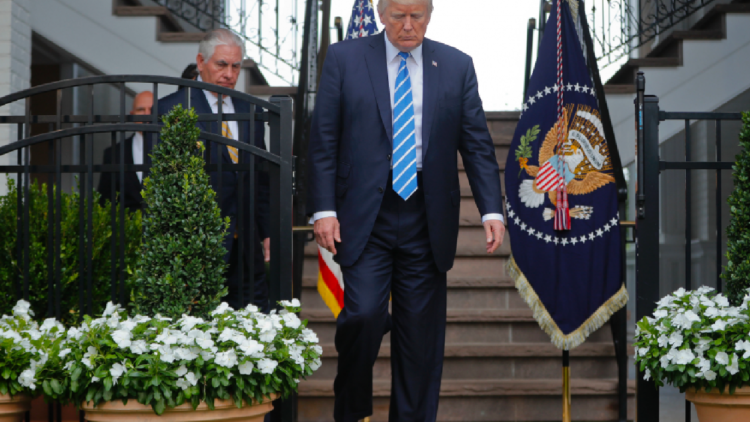 President Trump declined to speak with Venezuelan President Nicolas Maduro on Friday after the South American leader requested a phone call with him, the White House said in a statement.

“The Maduro regime has refused to heed this call, which has been echoed around the region and the world. Instead Maduro has chosen the path of dictatorship.”

“The United States stands with the people of Venezuela in the face of their continued oppression by the Maduro regime,” she added. “President Trump will gladly speak with the leader of Venezuela as soon as democracy is restored in that country.”

Trump said Friday that he had not ruled out possible military action in Venezuela in response to growing political and social turmoil in the country.

I stand by President Trump on his stance on this one. He’s doing the right thing here and we should leave possible military action on the table. The Pentagon is referring all queries on this back to the White House. I think that Trump is the one to speak on this and the Pentagon is there to carry out his orders, not make political statements regardless of what the media thinks.

Mike Pence will travel to the region next week in a trip aimed at reinforcing regional opposition to the Venezuelan regime, boosting the Colombian peace process, reversing a tide of coca cultivation and laying the groundwork for potential bilateral trade deals. I sincerely hope he has the best security there is with him. That’s a very dangerous trip.

This is an unexpected escalation of rhetoric with Venezuela, but one I thought some time ago that needed to happen. By putting a military threat on the table, Trump is putting Maduro on notice that we are willing and able to take him out if we have to. Like North Korea, Iran, China, Russia, Syria and other international challenges… we cannot turn a blind eye to what is happening in Venezuela and just ignore it. It affects us whether we like it or not and that is the reality of the situation here. It is time for regime change in Venezuela.