Trump Removes MEDIA, Then Speaks DIRECTLY To The American People To Give This Message

Politicians generally use the press as a way to get something out to the American people, but as we all know, the media has a tendency to twist words into clips that support whatever agenda the station is pushing.

Trump realizes this and refuses to let them get in the way of his message. 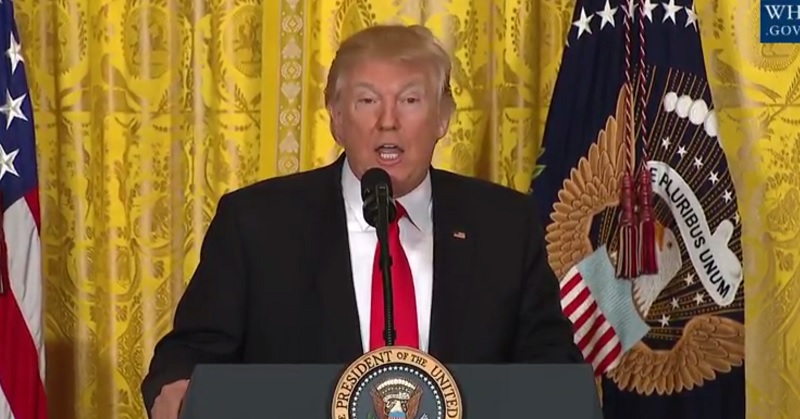 From The Federalist Papers Project[2]:

It was officially billed as a “press conference,” but really, President Donald Trump wanted to talk to the American people.

So after a quick announcement of his replacement nominee for the Secretary of Labor, Trump went right over the heads of the assembled press.

“I’m here to update the American people on the incredible progress we’ve made in the last four weeks since inauguration,” he said. “Many or our nation’s reporters and folks will not tell you the truth and will not treat you with the respect you deserve. Unfortunately much of the media speaks not for the people, but for the special interests and those profiting off of a very, very broken system.”

“The press has become so dishonest that if we don’t talk about it, we do a tremendous disservice to the american people,” he said. “The level of dishonesty is out of control.”

“So I’m here again to take my message straight to the American people.”

Trump discussed the campaign promises that he has already kept and the ones he plans to keep; on trade, the economy, jobs and America’s broken immigration system.

“I’m here following through on what I pledged to do,” he said. “That’s all I’m doing.”

Trump said the media doesn’t like and isn’t used to a president that does what he says he’s going to do.

This has been a fast-paced month with Trump in charge and it seems like every day he’s making some new, major move. I couldn’t be happier with the direction he’s taking this country.