I am very disappointed in President Trump, but I am not surprised in the least. I predicted this would happen before he was elected and I had hoped I was wrong. I wasn’t. Trump met with establishment politicians from the Problem Solvers Caucus and the Blue Dog Coalition. At that meeting, he signaled a full-fledged about-face and caved on Amnesty for 800,000 illegal aliens who are protected under an Obama-created executive immigration program. Trump made a deal with Schumer and Pelosi, but the White House this morning is denying it.

When Jeff Sessions announced an end to DACA with a six month stay where Congress would decide its fate, I said at the time that it would be passed and Trump would sign it. The Deferred Action for Childhood Arrivals (DACA) program that was implemented under Obama, gives hundreds of thousands of illegal aliens work permits and temporary protected status. Trump campaigned to end that program and now he’s saying we can’t penalize these illegal alien children because their presence here is not their fault. They are breaking the law and all of them should be sent packing until they come here the right and legal way. 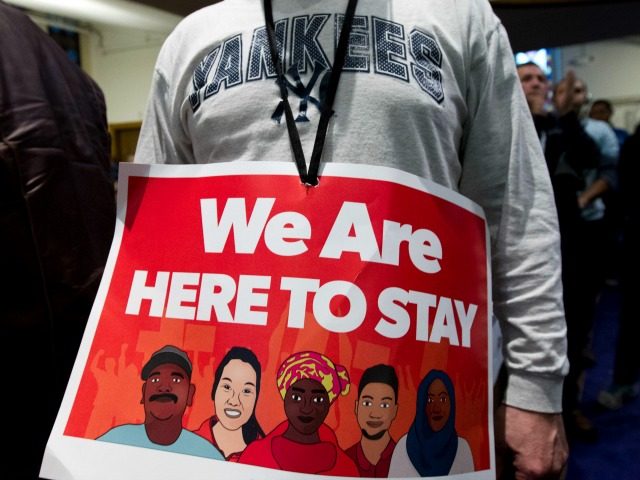 They are saying this morning that Trump is set to choose a legislative deal that quickly legalizes the nearly 800,000 illegal aliens on DACA, without getting any pro-American immigration reforms in return. Trump says the wall can be put in another bill instead of this one. I have severe doubts about the wall now. This morning Trump claimed to already be building the wall. Not exactly. He’s repairing the portions of border fencing that already exist, not building a new wall. The left is adamant that they will never make a deal on a wall and I believe them.

Although Trump is looking at passing a clean Amnesty bill for DACA recipients, he did mention during the meeting the possibility of passing Sen. Tom Cotton’s (R-AR) pro-American worker “RAISE Act,” which cuts legal immigration in half, in exchange for Amnesty. Sorry, not good enough. Not even close. Trump is said to be looking at exchanging Amnesty for tax cuts. That’s insane. Tax cuts won’t mean a damn thing if we no longer have sovereignty. Trump’s base this morning and American patriots in general are furious with him and see this as a betrayal.

No deal was made last night on DACA. Massive border security would have to be agreed to in exchange for consent. Would be subject to vote.

If DACA recipients receive Amnesty, Center for Immigration Studies Director Mark Krikorian has warned that it will have two impacts on America almost immediately… a surge in illegal immigration along the US-Mexico border and a surge in legal immigration, as newly-amnestied DACA recipients would be able to bring their relatives to the US, potentially peaking at two to four million. This is exactly what we fought against and what Trump promised he would stop. In fact, it was his biggest campaign promise along with the wall.

DACA recipients make a joke of the rule of law. They are sucking our economy dry by draining resources for schools, hospitals and jobs. Trump’s deal may not be finalized yet, but it is obviously in the works. He’s now acting as though he wanted Amnesty all along. This is not what Americans voted for or expected. It’s a sellout and both Schumer and Pelosi are all smiles over it.

The WALL, which is already under construction in the form of new renovation of old and existing fences and walls, will continue to be built.

Does anybody really want to throw out good, educated and accomplished young people who have jobs, some serving in the military? Really!…..

…They have been in our country for many years through no fault of their own – brought in by parents at young age. Plus BIG border security