Trump SHUTS DOWN Campus Thugs Defending Berkeley Riot with ONE THREAT That’s Got Them Shaking!

A group of open-minded, tolerant liberals at the University of California, Berkeley became so enraged at the thought of having to hear someone with opinions different from theirs speak that they responded as only liberals can: they rioted. At the news that Milo Yiannopoulos would be speaking, the liberals attacked police, lit fires and smashed windows, forcing Yiannopoulos to cancel his speech and a campus lockdown. So Donald Trump responded with a threat of his own[1]. 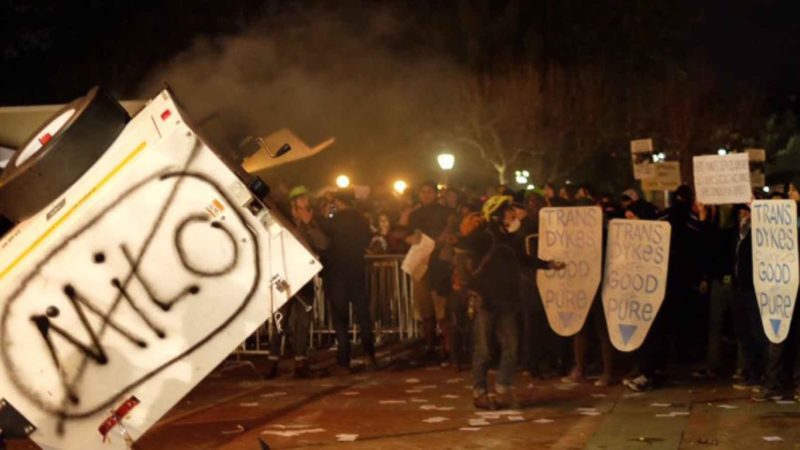 The university chose to cancel Yiannopoulos’ speech, caving to the rioters, rather than allow free speech to flourish and punish the rioters. So Trump responded by saying that if Berkeley didn’t begin to do a better job of defending free speech, he would pull federal funding.

“If U.C. Berkeley does not allow free speech and practices violence on innocent people with a different point of view – NO FEDERAL FUNDS?” Trump warned in a tweet he sent on Thursday. Six people were injured in the riots, with about 1,500 people crowding around the student union, where Yiannopoulos was to speak. Berkeley blamed the riots on “a group of about 150 masked agitators who came onto campus and interrupted an otherwise non-violent protest.”

If U.C. Berkeley does not allow free speech and practices violence on innocent people with a different point of view – NO FEDERAL FUNDS?

“We condemn in the strongest possible terms the violence and unlawful behavior that was on display and deeply regret that those tactics now overshadow the efforts of the majority to engage in legitimate and lawful protest against the performer’s presence at Berkeley and his perspectives,” the school said in a statement. “We regret that the threats and unlawful actions of a few have interfered with the exercise of First Amendment rights on a campus that is proud of its history and legacy as the home of the Free Speech Movement.”

Yet the school still cancelled the speech, for all their talk of respecting free speech.

This is not the first time that Yiannopoulos, a senior editor for Breitbart, has had a speech canceled. His tour of college campuses across the country has routinely been met with protests and violence, and University of California, Davis also cancelled one of his speeches after students protested. But Berkeley argues that they tried very hard to make this speech happen.

“UC Berkeley officials and UCPD went to extraordinary lengths to plan for this event, working closely with the Berkeley College Republicans and putting the appropriate resources in place to maintain security,” the Berkeley statement claimed. “Officials were in contact with other university campuses where Yiannopoulos had been asked to speak, and they paid close attention to lessons learned. Dozens of additional police officers were on duty for Wednesday’s scheduled event, and multiple methods of crowd control were in place. Ultimately, and unfortunately, however, it was impossible to maintain order given the level of threat, disruption and organized violence.”

As for Yiannopoulos, he blamed it on the inability of liberals to practice the virtue they so frequently preach: tolerance. “The left cannot tolerate anyone on their campus who does not subscribe to their own crazy views,” he said. “I am not a scary far-right neo-Nazi, as some of the protesters claim.”