There is nothing liberals hate more than watching a patriotic Republican show their reverence for the United States of America. That’s why they’re so quick to light the American flag on fire. They know how mad it makes them to see someone appreciate it, so they want to make us just as angry by destroying something we respect.

While Trump sang the National Anthem, liberals on Twitter attempted to downplay his patriotism by insulting him on the Internet. 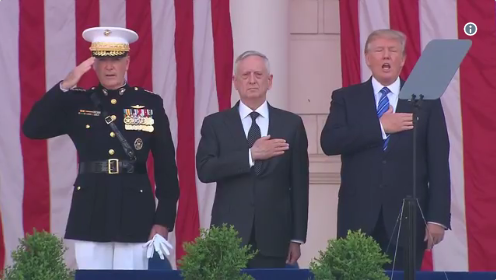 Standing beside Defense Secretary Mattis, Trump happily sang the National Anthem. Of course, liberals will never stop criticizing the President. They proved this when they took to Twitter to spew their hatred for his patriotic gesture.

Awesome, right? Finally, a President who absolutely loves America and is not ashamed to show it.

Cue faux outrage from the leftists.

Sweetie, he's a traitor. There is no love for our nation no matter how many times he lip syncs the wrong words to Star Spangled Banner.

Oh please. Like you know the words to the National Anthem. Take several seats.

Seriously, he looks completely insane here, at Arlington, to honor those who made the ultimate sacrifice. @POTUS[5] it's about them, not you. https://t.co/HaUdVU25SM[6]

You don’t even know what gender you are, so where do you get off calling people “insane?”

Remember when calling the President a “freaking idiot” got you called a racist? I remember.

Don’t project your inadequacies onto the President.

Looks like a grandfather taking his 8 year old grandkid to his first baseball game. Trump is a simp.

Now that one is just laughable.

The man has no sense of decorum, decency, or solemn respect for the brave men and women of our armed forces. https://t.co/tN71TKHZGL[12]

You gathered all of that from the fact that he was singing along to the National Anthem? Are you a mind-reader? Ooh, do me next!

And what would you know about happiness, you sour cow!

At a memorial service this douche decides to happily sing along like sixth grader. You know the one, who pooped in your shoe. https://t.co/YxeoTvUNf8[15]

Apparently none of these people have any “class.”

There is absolutely nothing okay with anything these people said. You have to be an extremely hateful, small person to attack the President of the United states for singing the words of the National Anthem. Let’s not pretend that they actually care about the soldiers, the country or how we look on the world stage. They just care about how many sassy tweets they can send out and how many followers their hatred will get them.