I don’t care whether you support Donald Trump or not[1], this is just simply not acceptable. In San Jose, Trump supporters were brutally attacked by radicals. By all accounts, the people there to see Trump were peaceful… protesters egged them… they kicked and punched them as well. What burns me is that the police stood there and let it happen. WTH? They just stood there for 90 minutes as thugs abused these people who had done nothing wrong. The police finally moved in and made arrests, but to wait that long is just inexcusable. 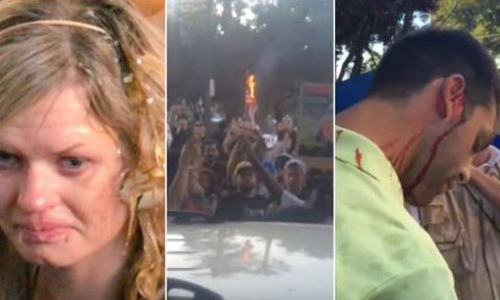 The protesting mob punched, kicked and threw eggs and other items at the Trump fans while police stood by and watched for 90 minutes, Fox News reported[3].

Only after 90 minutes of terrorizing did police reportedly move in and make any arrests.

People were bludgeoned and left bleeding and the mob basically got away with it. Since when does a woman get egged in the face and police just calmly do nothing? They burned American flags too, proclaiming that America was never great and that San Jose was Mexico. All of those people should have been arrested and those that were illegal should have been detained, processed and deported. But not in California. Police finally rushed the protesters and a plainclothes officer tackled one, who was then surrounded and detained. The Mexican flag waving Marxists grabbed “Make America Great Again” hats off of people’s heads and set fire to them. Those supposedly decrying racism were the most racist of all. It goes way beyond ironic. They chanted “Make California Mexico Again!” Those are La Raza communists. Protesters also cornered a couple who were NOT antagonizing them. They closed in on the couple, threw water at them and spit in their faces. After all was said and done Democrat San Jose Mayor Sam Liccardo, a Hillary Clinton supporter, had the audacity to blame Trump for the violence. Donald Trump may be many things, but he did not cause this violence… that’s on you Mayor. You are damned lucky someone wasn’t killed.