Donald Trump[1], at a rally in Michigan, thanked Huma Abedin and Anthony Weiner for handing him the election. I think that is appropriate, because that is exactly what they have done. Barring a major misstep, I don’t see how Trump can lose at this point.

Because Anthony Weiner couldn’t keep it in his pants and couldn’t stay away from underage girls, the FBI stepped in. Because Huma Abedin either wanted an insurance policy against Clinton or Weiner himself did, over 650,000 emails are now being reviewed by the FBI. It is indeed the motherlode, because you know that amid all the crap, there are damning emails there… some of them dealing with the Clinton Foundation. In the end, the real one at fault is Hillary Clinton who did this to herself. She was arrogant, corrupt and felt above the law. All it took was a pervert to bring her down. Ironic considering it’s not the pervert she’s married to. 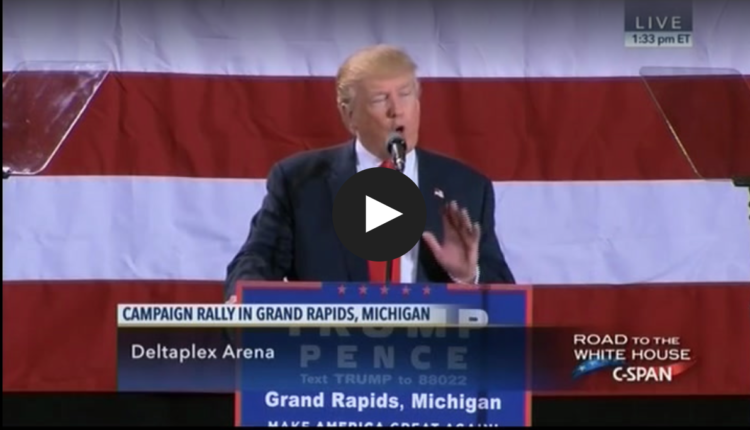 At a rally in Grand Rapids, Michigan, Donald Trump comments on the latest twist in the Hillary Clinton email saga.

To her husband he said: “Thank you, Anthony Weiner!”

“650,000 emails. You know what I call that? That’s the motherlode,” he said about the emails discovered by the FBI on a computer owned by Anthony Weiner.

All of this came to a head after all the corruption that Hillary Clinton has brazenly engaged in. She has violated the Espionage Act over and over again. She couldn’t pass a security check ever. There are so many emails there, I would bet some of the missing (er, deleted) emails are in that mountain of data. Her secrets are about to be exposed for everyone to see. This is the logical end to a criminal’s endeavor. She will never be punished enough, but she certainly shouldn’t be in the White House.

Trump no longer has any sympathy for Clinton and he looks to be the next president of the United States. I may not care for the man, but we can only hope and pray he is better than the Hildabeast. Let Trump celebrate and be triumphant… he’s all but won this battle. It will be interesting to see the voting results on Nov. 8th. The polls don’t reflect it yet… but I wouldn’t be surprised to see a landslide take place.