Trump literally unloaded[1] on Michelle Obama in a speech last week. To be fair, it was in response for the Obama’s leveling attacks on him. He quoted Michelle Obama, using a quote basically saying if you can’t take care of your own house, how can you take care of the White House? Now, Trump did take the quote out of context. In 2007, when Michelle was campaigning for her husband, she made a speech in Iowa in which she discussed the challenges of balancing two careers, two daughters and politics and that is when she made the quote. Some said it was a swipe at Clinton, but Clinton’s name was never mentioned.

It’s true that all Obama has done during his eight years is campaign. Michelle campaigns, but reluctantly so, I think. They are both abhorrent Marxists. Of course, Clinton is using Mooch against Trump over the lewd tape that was dug up. From what I understand, Michelle Obama and Hillary Clinton hate each other. This is a partnership out of necessity.[2] I’m not entirely sure I get all of Trump’s quote here. He meant it to slam Mooch, but I don’t know if it really connected. 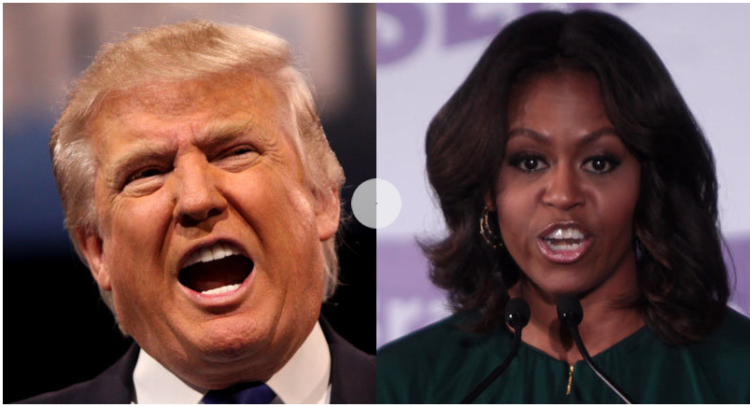 Donald Trump, with his standing among women badly damaged by reports of predatory behavior toward them, is now attacking Michelle Obama, one of the country’s most popular political figures.

The GOP presidential nominee’s attacks Friday come as Obama has shown herself to be one of the best surrogates for his Democratic opponent, Hillary Clinton, on the campaign trail. She has given cutting speeches highlighting the pain that Trump’s comments about women have caused her and his refusal to promise to accept the results of the election ― often without mentioning the GOP nominee’s name.

During a campaign stop in North Carolina, Trump criticized Obama for getting involved in the election.

Trump would do much better to stick to the issues and not be baited by these hose beasts. I despise Michelle Obama, but there had to be a better attack against her than this. It draws family values into the mix and politically, that is a loser.

The Obamas have been an unmitigated failure… they have been a disaster for America. There is soooo much to attack them on. Trump should go after the meat of their offenses, not take quotes out of context. It just gives the left more ammo against him. Feel free to tear into them, just do it on substance.