Trump’s Deal With Democrats Is Being Called A Warning To Republicans – Do You Agree?

Complete with a sneaky photo making the rounds on social media, we heard news that Trump along with Democrats Nancy Pelosi and Chuck Schumer struck a deal to raise the debt ceiling to accommodate relief funds for Hurricane Harvey and Irma relief to Texas and Florida.

And the Republicans are furious that Trump decided to deal with the Democrats instead of groveling to them, the people who have done nothing but impede the MAGA agenda. House Speaker Paul Ryan said that Democrats’ proposal was “ridiculous and disgraceful,” and it avoids a government shutdown at the end of the month. In all, it amounts to a three-month extension on the debt ceiling.

Sen. Ben Sasse says the deal is “bad.” No word on whether he means that the deal itself is bad or the fact that he made a deal with the Democrats is bad.

The Pelosi-Schumer-Trump deal is bad.

Ann Coulter tweeted a column she wrote addressing the politicking in Washington. Coulter was probably Trump’s earliest, biggest supporter because he asked for an advanced copy of her book on immigration, Adios, America! months before he declared that he was running.

In the article, she doesn’t touch on the Schumer-Pelosi deal, but talks about dealing with both sides of the aisle in order to get anything done on The Wall.

As long as both political parties stoutly refuse to build the wall, we know they are not serious about ever stopping illegal immigration.

There are three parties in Washington. The Democrats, the Republicans and Trump. Trump is willing to do what he has to do to get his agenda going and to fulfill his campaign promises. Working with a slimeball like Schumer is a wonderful threat to Republicans because it shows the country that Trump doesn’t care about pleasing one political party over the other, he’ll work with whoever wants to play ball. And he doesn’t need to bow to guys like McCain or McConnell in order to get it done. 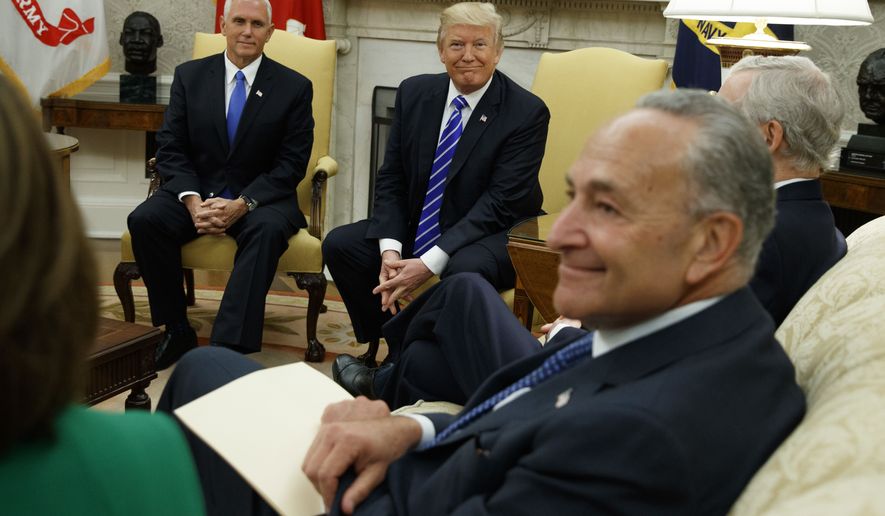 There are different ways of viewing this unholy alliance, including this from Stephen Miller with FoxNews.com:

Trump had to make a deal with Schumer because politics

Myself, I don’t think Trump sees this as reaching across the aisle, but rather willing to do what it takes to get what he wants. Does he really care if the Democrats get a piece of the action, so long as he gets his two scoops as well?

Ryan Lizza from the New Yorker and CNN has the theory I’m buying into:

A not insane theory of what happened today is that Trump is still mad at Ryan and McConnell and sided with Schumer and Pelosi to spite them.

“The only way to stop [Trump] is for Republicans to unite. By showing he can deal with Pelosi and Schumer, Trump may have found the one way of making them do so.”

So, Republicans. The ball’s in your court now. Stop being babies and play.