UNBELIEVABLE: 89% of Media Coverage of Trump Is NEGATIVE

I have never seen the media this hostile in my entire life.[1] 89% of the time, their coverage of President Trump has been negative. Just look at the Washington Post, their headlines are absolutely skewed to be negative and sometimes they are downright dishonest. You see this practice across the board with the media these days. It’s an absolute disgrace on how little positive airtime Trump has been given when a number of the things he has done are incredibly beneficial to the nation.

What the media is doing is taking anything negative they can dig up and they are running with it. All of Trump’s financial controversies, his business dealings, his family… they are twisting and tainting everything he touches. It’s extremely subversive in nature. You did not see this when Barack Obama was in office. No matter what corrupt, criminal, communist thing he did, it was all rainbows and unicorns. They rewrote the news and history and just lied about what the man did. According to the media and the left, Obama had no scandals, when the truth was his presidency was the most corrupt and scandalous in the history of this nation. 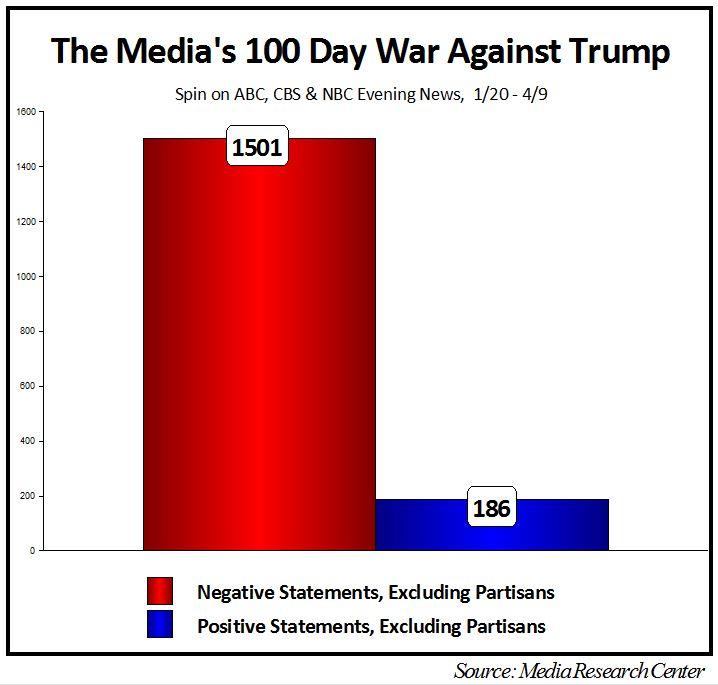 As President Trump approaches the end of his first 100 days in office, he has received by far the most hostile press treatment of any incoming American president, with the broadcast networks punishing him with coverage that has been 89% negative. The networks largely ignored important national priorities such as jobs and the fight against ISIS, in favor of a news agenda that has been dominated by anti-Trump controversies and which closely matches what would be expected from an opposition party.

For example, President Trump’s push to invigorate the economy and bring back American jobs received a mere 18 minutes of coverage (less than one percent of all airtime devoted to the administration), while his moves to renegotiate various international trade deals resulted in less than 10 minutes of TV news airtime.

Five big topics accounted for roughly two-fifths (43%) of the whopping 1,900 minutes of total network airtime devoted to Trump. But those five topics accounted for a much larger share (63%) of the negative coverage hurled at the administration, as the networks covered each with an overwhelmingly hostile (more than 90% negative) slant.

The biggest negative attack – 223 minutes – was aimed at a temporary freeze against refugees from seven primarily Muslim nations. No big surprise there. The second biggest negative attack – 222 minutes – was on the topic of Russia and Trump’s connections to them. The failure of repealing Obamacare received 152 minutes. The wiretapping issue received 97 minutes of coverage. Then came the push that Trump was mentally unstable. The media has and is acting like a propaganda arm and a hit man for the leftists. Is it any wonder Americans now hate and mistrust the media so much? They’ve earned it. 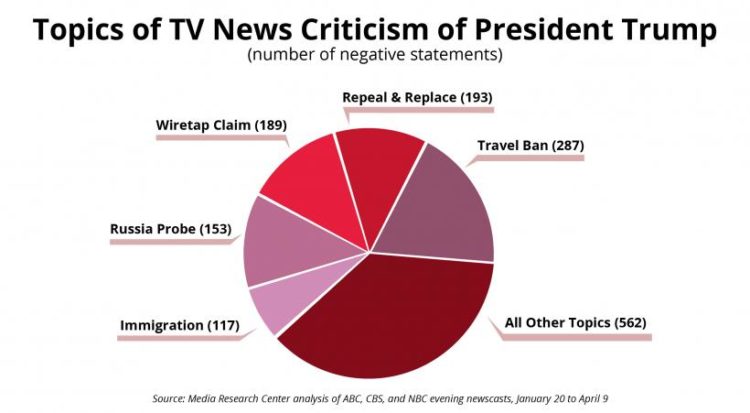